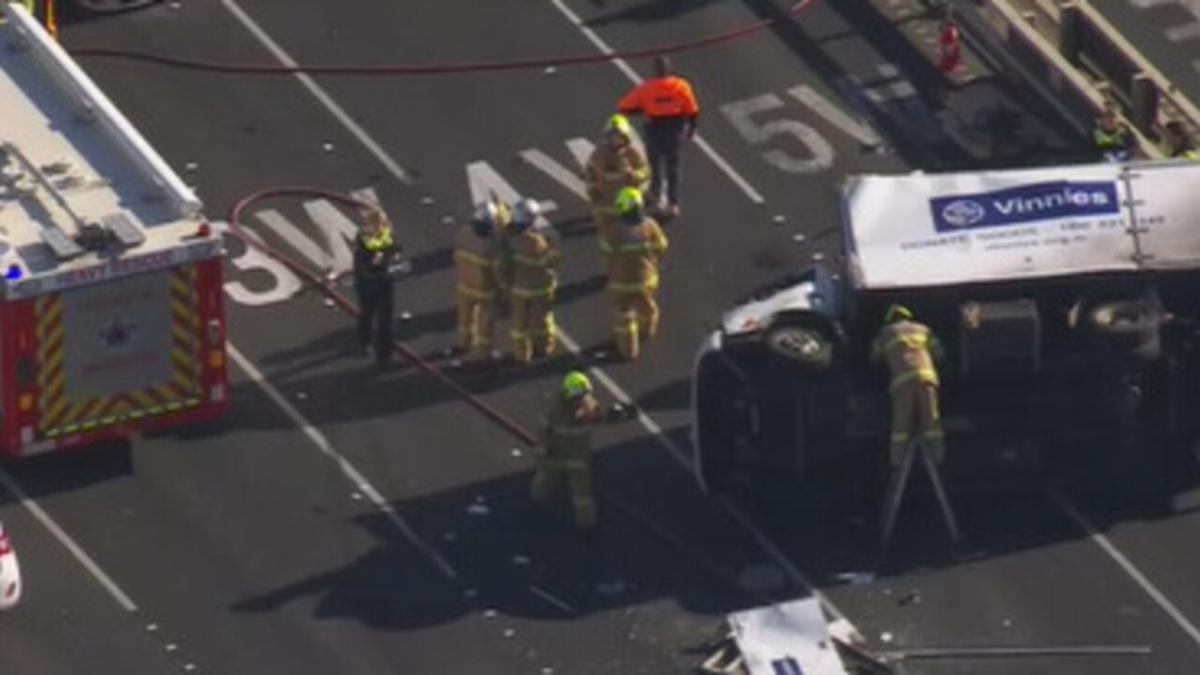 Two men are fighting for life after a serious crash on Melbourne’s West Gate Bridge which has brought traffic in the CBD to a halt.

A silver sedan was reportedly travelling outbound along the West Gate Freeway near Williamstown Rd when it collided with a Vinnies truck around 10.35am on Tuesday.

The Vinnies van then rolled onto its side and blocked several lanes. Emergency crews had to free one man, believed to be in his 20s, from the car.

The driver of the Sedan and one of its passengers, both men, were taken to hospital with critical injuries.

Three other men who were also in the car are being assessed by paramedics.

The two male occupants of the truck were not injured and were assessed by paramedics at the scene.

A driver who was on the West Gate Bridge at the time said a silver car sped past him “like a bullet”.

“He was driving like a madman,” the 3AW caller said.

“I thought to myself, he won’t make it to the other side of the bridge.”

The caller confirmed the speeding car was the one involved in the crash.

Live shots of the scene appeared to show multiple people in handcuffs, though police have confirmed no arrests at this time.

Camera IconA person who appears to be in handcuffs on the West Gate Bridge. Kate McGrath/Twitter Credit: Supplied

There are significant delays as a result of the crash and are expected to last for hours.

“All outbound lanes of the West Gate Freeway are now closed at Montague St due to a serious collision on the bridge. Drivers should look to use Montague St, Wurundjeri Way and Footscray Road returning to the freeway via Williamstown, Millers or Geelong roads,” VicTraffic said.

“The West Gate Freeway remains closed outbound between Montague Street and Williamstown Road, following a serious collision on the bridge. Avoid using the West Gate Freeway, as there are significant delays in both directions, also impacting the Monash Freeway.

“The citybound lanes of the freeway are heavily congested from the M80 Ring Road. Use Geelong Road instead. Please be patient and follow the direction of emergency services. Victoria Police will re-open lanes when it‘s safe to do so.”

The exact circumstances surrounding the collision in Spotswood are yet to be determined and police investigations are ongoing.

Anyone with information, who witnessed the collision or has dashcam footage is urged to contact Crime Stoppers on 1800 333 000.