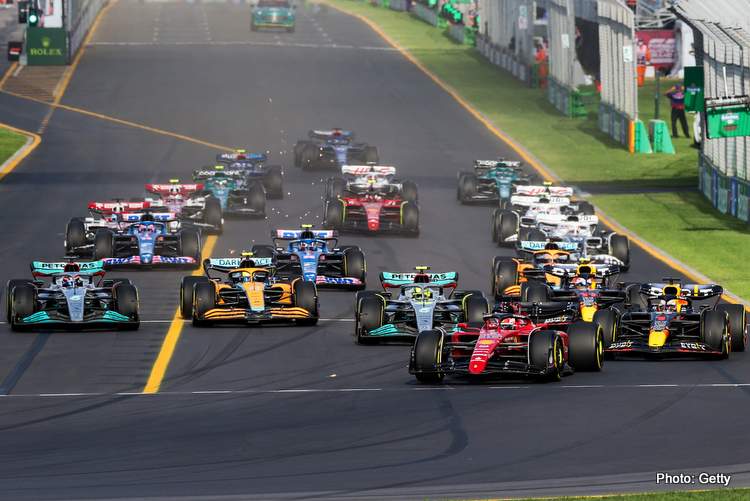 Formula 1 returned to Melbourne after two years of absence from the sport’s calendar, and the 2022 Australian Grand Prix last weekend gave us plenty to think about.

The first fly-away stanza of the 2022 Formula 1 season is over and after 3 rounds of a new era for the sport I think we have now seen enough to be able to start to understand who the real contenders are going to be.

Firstly, before going into some of the topical technical matters relating to the cars, I think it worthy to start with the Australian Grand Prix event itself.

Melbourne and its sports mad population are what made the event, and it is just as well because in my mind the race itself was somewhat of a fizzer in comparison to the racing we were privileged to witness at Bahrain and Jeddah, and it all boils down to the nature of the Albert Park circuit.

There was much anticipation that changes to the circuit profile would be conducive to more overtaking, but the reality is that whilst the average lap speed for an F1 car certainly did increase, Albert Park was no easier to overtake on.

Perhaps it was because one of the consultive leads for the project was Mark Skaife, a retired Australian touring car driver who now is a TV pundit and financial shareholder in that country’s premiere category, the V8 Touring Cars, as the circuit changes certainly suited more overtaking in that category. Only a very small minority of the global television audience would even be interested in a domestic support category.

I am quite certain that the sudden removal of the 4th DRS zone on Saturday morning before FP3 would have had little impact on overtaking opportunities, simply because the amount of time the device was open in that zone was very minimal indeed.

Unfortunately, it is rather the very nature of the Albert Park circuit itself that is always going to preclude easier overtaking opportunities and I can’t help but feel that the only way it will ever become a circuit known for overtaking opportunity will come with a complete redesign from scratch. And to me, any circuit with a lap time of around 80 seconds with a 150mph average lap speed in the modern era is probably a bit short in distance as well.

Ferrari and Red Bull coping with the “bounce” best

Even in Melbourne the main narrative of the new era F1 car behavior is still “porpoising”.

Except for Red Bull, it seems as though every team has simply decided to deal with the bouncing, for now at least, and find ways of working around it. Even if Ferrari was clearly the class of the field, the F1-75 appeared to be the most pronounced sufferer of “the bounce”, and yet the moment the car entered any corner the bouncing would stop instantly and was glued to the surface, almost as though the brake pedal was a switch that turned off the bounce.

With Red Bull seemingly eradicating “porpoising” completely, and Ferrari finding a way to turn it off at corners, I wonder whether both teams have found some form of mechanical trick that is helping them.

On the other side of the issue is Mercedes, who were suffering of the phenomenon almost as badly in a straight line as Ferrari but weren’t as able to switch it off for corners and worryingly carrying the bounce into the corner.

Nevertheless, even though the performance level of the Mercedes power unit has been questioned by some, it also seems to be the most reliable in the field to date.

As I mentioned in the intro to this piece, after 3 races this year, we are now coming to understand what trends are determining performance in the new ground effect era, particularly at the pointy end of the field.

Naturally it is the teams that have learnt to deal with “porpoising” most effectively that are realizing the better results at this stage of the season but at the front of the field, the primary performance differentiator seems to be tyres, and to be more specific, it is those who can generate and maintain tyre carcass temperature the best that are producing the best temperature ramp up cycles and avoiding graining.

Reliability issues in Bahrain and Melbourne aside, Red Bull’s most significant performance issue in its battle with Ferrari appears to be precisely that, particularly graining issues on the main loaded front tyre and the rears in general.

Not only does the technical regulation change for 2022 limiting the ability to radiate brake rotor heat through the wheel into the carcass compound this issue for some, but less amounts of rear wing over the rear axle also seems to be doing the same thing. Teams such as Ferrari and Mercedes, who are carrying more rear wing for whatever reason seem to be avoiding graining issues.

However, at this early stage of the new era of 18” wheels, it appears that ultimate performance in F1 still remains closely linked to the sensitivities of the Pirelli tyres.

With the official line being that Honda are no longer a power unit supplier in F1 as of the final race in 2021, is there trouble in the Red Bull Power Trains (RBPT) paradise?

Remember how Red Bull’s testing plan at the first 2022 pre-season test in Barcelona was compromised by a power unit issue identified as MGU-K shaft failure?

Worryingly, as of the end of the race in Melbourne, out of the four RBPT powered cars on the grid, two are already on their second MGU-K out of their allotment of three, and three of the four cars are on their second MGU-H of the allowed three. The only other car on the grid to have replaced an MGU-K or -H at this stage of the season is Fernando Alonso’s Renault-powered Alpine.

So far this year we have seen two DNF’s in Bahrain for Red Bull due to fuel system vaporization venting issues, a power unit related DNF with fire for Gasly in Bahrain, another DNF with fire for Max Verstappen in Melbourne, and a DNS in Jeddah for Yuki Tsunoda due to PU issues as well.

What this means is that of the twelve finishes possible for RBPT powered cars in 2022 to date, there has been a 42% failure rate.

Verstappen’s retirement in Melbourne has been attributed to an external fuel leak. The only external fuel connection is the connection of the fuel line from the tank to the high pressure injection pump.

Given it wasn’t RBPT’s first fire for the year, and that this year’s fuel is E10 which is 10% ethanol, is there a material compatibility issue resulting in degradation of the connection?

The current sporting regulations mandate that each car must stop at least once and must use at least two of the three available tyre compounds during a Grand Prix. The need to use two different compounds during a race was brought about by the rule makers some years ago to spice up the racing, as usual, and to do away with the days of the Bridgestone compounds that would almost last forever and give good grip throughout the life cycle.

However, considering Alex Albon’s brilliant performance to 10th place in Melbourne, seeing out the race on the set of Hards that he started on and boxing on the last lap to take on the soft, I question why two compounds need to be used so long as a minimum of one pit stop is taken anyway.

Maybe its time for F1 to simply mandate that a minimum of one pit stop is required for each car during the race to change tyres, but the compound(s) used is a free choice.

It would have been exciting to see Albon be able to pit at an earlier time, like mid-race, and take on another set of Hards and continue with the pace he had.

The joke that is the FIA Friday “show and tell”

F1 is a fiercely competitive sport, and teams are as equally guarded about their research and development.

So, when Ross Brawn et Al proudly announced last year that in 2022 teams will be required to line up at each Grand Prix and present their newest developments in a “show and tell manner”, I was dubious to say the least, and curious about how real and honestly this was going to be treated by the teams.

And so, on Friday afternoon as Ted Kravitz noticed that the Ferrari F1-75 on display during “show and tell” between FP1 and FP2 was Carlos Sainz’s and not Charles Leclerc’s with the new diffuser tested in FP1, I was hardly surprised that the Scuderia team member available with the car to answer questions laughed and scoffed at the suggestion that we might get to see the new diffuser.

The FIA mandatory “show and tell”? What a joke.

Drivers are paid enough to make the trip down under

During the Melbourne weekend several drivers questioned the viability of to the Australian Grand Prix as a standalone event due to the larger distances required to travel there, and that it would be fairer on the teams if it was a part of a combined double header fly away.

Melbourne might have been a standalone event in 2022, but it was also already two weeks after Jeddah, and that’s more than enough time for most team members to have flown back to the UK to be home Monday night latest, and then enjoy 5-7 days there before going through the 24/30-hour flight to Melbourne.

It is becoming a bit tiring to hear of all of this to be honest.

A conscious decision to take on F1 as a career path is also a cognisant one, accepting of the travel demands required. And in 2022 all personnel in the paddock are paid in a manner that reflects those demands.