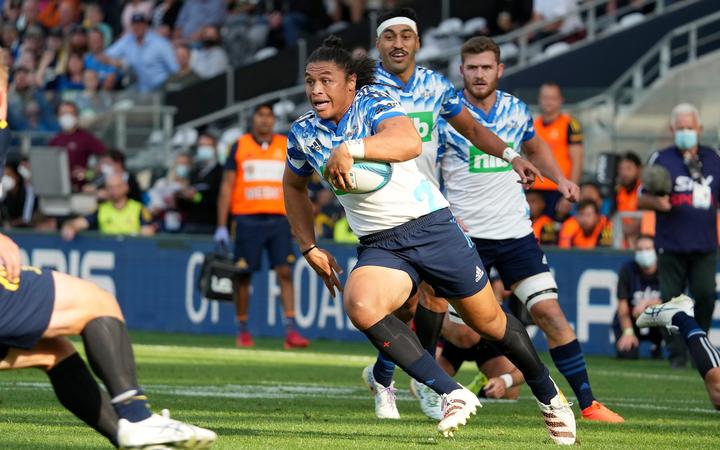 Super Rugby Pacific has lurched from disaster to triumph and everywhere in between this season, but the latest innovation could go either way.

The Blues match against the Fijian Drua may be a highlight of the upcoming round in Melbourne, Jamie Wall writes.
Photo: PhotoSport / Michael Thomas

The word ‘innovation’ is, admittedly, doing a lot of heavy lifting in that statement, but the decision to hold an entire round of the competition in one venue over one weekend is being seen (by the people who made it, at least) as a way of generating some much needed interest in the latest version of the Southern Hemisphere’s premier competition.

So that’s why we find our attention drawn to AAMI Park in Melbourne for an almost full slate of games for the weekend. Let’s have a look at the pros and cons of the Super Round:

Pro: It’s in Melbourne. AAMI Park isn’t the home of a particularly successful team, but it is a very good, purpose-built stadium in the heart of a designated sporting district. Access is great and it’s only a short walk to the city and its bars.

Con: It’s in Melbourne. Due to the long layoff in international travel, airlines are clearly trying to make up for lost time with some very exorbitant prices for flights. A return trip over for the Super Round would set you back almost two grand, and that’s without accommodation and spending money. So don’t expect to see too many fans making the journey, which was kind of the whole point.

Pro: It’s something different. The New Zealand derby phase of the competition has thrown up some really good games, especially last weekend in Christchurch. But it is time to see them play someone else and the Australian leg will mean that wider squad members are used in an attempt to keep players healthy.

Con: But not that different. In yet another case of union blatantly copying rugby league, this is a direct copy of the NRL’s Magic Round, which in itself is based on the Super League version that dates back to 2007. But hey, Super Rugby copied the 40/20 and is slowly turning into league anyway, so it’s only natural.

Pro: It’ll give the Aussies a chance. Much has been made about how the teams from over the ditch will struggle, which is interesting given how bad the Hurricanes were against Moana Pasifika and how bad the Highlanders have been overall. Sure, the Reds and Brumbies aren’t playing at their actual home grounds, but they will fancy themselves in those two matchups.

Con: The most interesting game isn’t happening. Moana Pasifika have been hanging out to get their hands on a team like the Force and prove that their torrid beginning has been a good learning experience at least. For the fourth time this season, though, Covid-19 had other ideas and has meant that the Western Australians have had to leave Moana Pasifika waiting yet again. That presumably means they’ll have another three-game week, as if their existence wasn’t challenging enough as it is.

Pro: The Blues v Fijian Drua should be a great watch. The Blues will win this game and probably pretty comfortably too, but there is no reason why they wouldn’t unleash their extremely potent backline firepower for this one. The Fijians only seem to know one way to play as well, which is end to end, so it’s likely that there will be some cracking tries.

Con: There is no commitment to keeping this going. No one is to blame for the challenges that Super Rugby Pacific has faced so far, apart from the players who have got themselves needlessly sent off. Frustratingly, here is something that should be catching people’s attention if it had the proper buildup and marketing, but NZ Rugby confirmed midweek that the entire concept is reliant on this first edition being a success. Which, given that it is in a non-rugby city in an Australian market where the sport is really struggling, seems like a hard yardstick.

This could work, if it were on the Gold Coast or in Brisbane and cheap flights could be put on as a package deal. Hopefully next year we can find out.