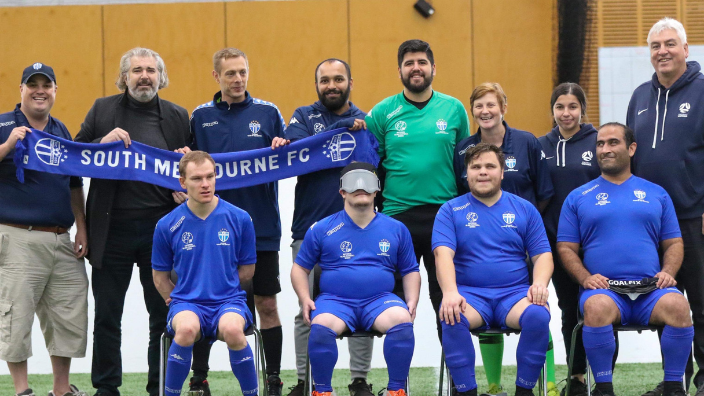 The blind football team at the South Melbourne Football Club put in a dominating performance to defeat Brisbane Olympic FC 2-0 at The Hangar in Melbourne.

The National Blind Football Series kicked off in Melbourne this weekend marking the first-ever competitive blind football match in Australia.

South Melbourne’s Brendan Spencer was aggressive in the attacking half for the victors with a stunning display of footwork and free-kick taking.

Spencer hit the woodwork midway through the first half with South holding a majority of possession thanks to Nathan Letts and Amir Abdi in the midfield. After the break South continued to pile the pressure on the Olympic defence earning repeated corners and scoring opportunities.

The first goal of the match came with Spencer dribbling past three defenders, his shot unable to be held by the Olympic keeper and the ball rolling across the line.

His second just a few minutes later from a free-kick flew through the four-man wall into the bottom right of the net.

“It was a hard-fought match against Olympic. The skill, the intensity, the camaraderie really showed through with the way we supported and encouraged one another,” Spencer said.

“I am really proud of myself in being able to score those two goals and it has shown the hard work I’ve put toward the game in the gym and on the training track has really paid off.”

When asked how it felt to be a part of South Melbourne’s Blind Football Team, captain Amir Abdi, said “South Melbourne see us as friends and members of the club, giving us a real sense of belonging.”

“It gives us energy to keep trying, get better and have a good future for Australian blind football,” Abdi said.

In the final minutes, Brisbane Olympic FC secured multiple corners trying to get themselves on the scoresheet. The efforts of defender Brad Pinkett and keeper Nathan Meneses held strong walking away with a clean sheet.

The two goals delivered South Melbourne a resounding victory, with the team recording a win in the inaugural match of the National Blind Football Series.

South Melbourne coach, Ankit Singh, said: “It was a brilliant match. The whole occasion was beautiful for the players.”

“The result didn’t really matter but it is always good to get one over your rivals,” Singh added.

The CEO of Football Victoria, Kimon Taliadoros, was also in attendance and he lauded the club for its initiative and commitment to inclusive football.

“Events like today and the first competitive blind football match in Australia don’t happen unless there is commitment from a lot of people. Football Victoria has been one but also South as well,” the CEO said.

South Melbourne’s President, Nicholas Maikousis, said that the Blind Football Team is only one example of the club’s drive towards achieving an “all abilities football program”.

“We recognise the importance sport can play in everyday life, bringing people from different walks of life together through football and we aim to provide an inclusive environment around the club to achieve this,” Mr Maikousis said.

“Our all abilities program started four years ago with our powerchair team and last year expanded to include blind and vision-impaired football. There have been many successes to the program the latest of which we’ve seen this weekend making history by participating in and winning the first match in the National Blind Football Series.”

The National Blind Football Series returns to Melbourne in July where South and Olympic will face off once again.

The series and the accompanying national training camps are preparing the players who travel to India in October to compete in the Asian Cup.