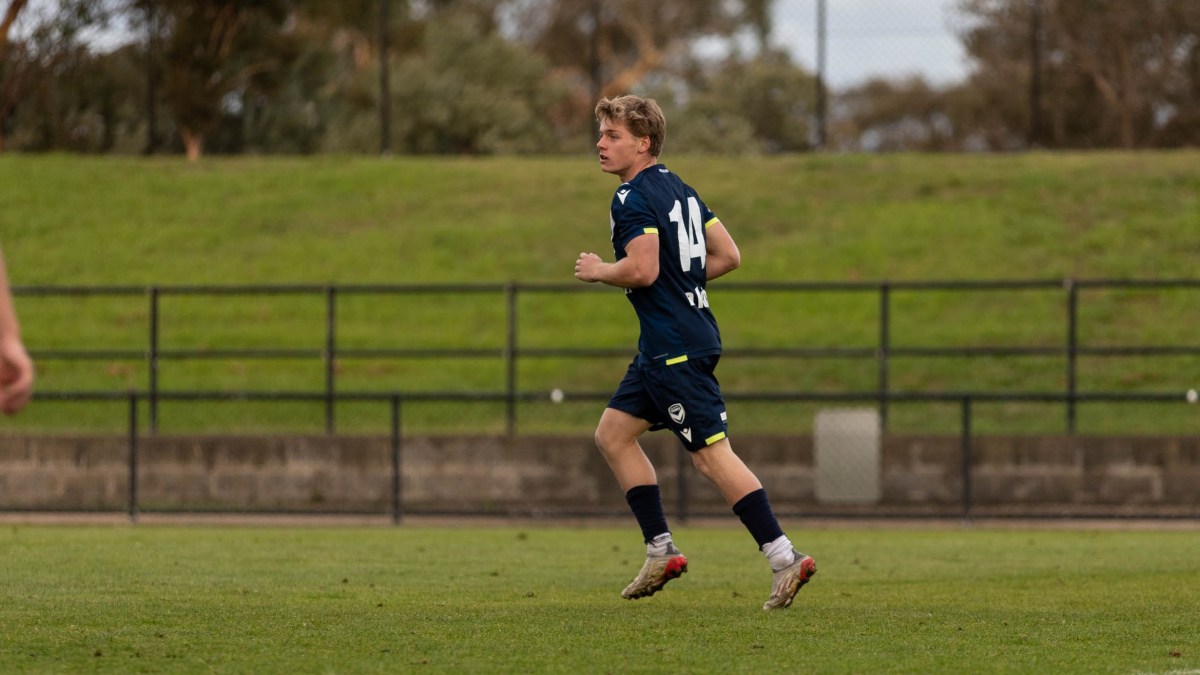 Melbourne Victory have returned to the winners’ circle after edging out Springvale White Eagles 2-1, thanks in large part to a game-changing triple substitution.

Perfect conditions on a Saturday afternoon set the scene for a significant contest at both ends of the NPLM 3 table.

Springvale came into the game desperate for points in the fight to stave off relegation, whilst for Victory the pressure in the promotion race continued to increase.

Both Preston Lions and Western United secured wins on Friday night, making three points essential for Victory to keep pace with their rivals.

The first half was a tight affair with neither side able to dominate for long periods.

Shots at goal though remained few and far between for both sides.

The half seemed destined to end without a goal when in the final minute, Springvale found themselves through one-on-one facing Victory keeper Siciliano.

Siciliano came out on top though, managing a remarkable save down to his right to keep his side’s clean sheet intact at the break.

The second half continued in a similar fashion to the first, with both sides showcasing strong defensive performances.

Victory made a triple substitution just before the hour mark, as Nicholas Hamakiotis, Kasper Hallam and Patrick Hogan all made their way onto the pitch for the final phase of the contest.

The changes would prove to be a coaching masterstroke which significantly altered the course of the game.

A smooth piece of attacking play utilised Hogan’s fresh legs on the left wing, before he cut inside and executed a sublime finish across the goalkeeper to give Victory the advantage.

Victory did not have to wait long for their second.

Within 10 minutes of the opening goal, Paneras found himself in space on the right side of the pitch where he delivered a pin-point cross right to the feet of Duratovic looking to score in his third consecutive match.

The striker made no mistake with the finish, doubling Victory’s advantage and placing the home side in firm control of the contest.

The game had well and truly come to life for the final stages as both sides continued to play with great intensity up to the final whistle.

Springvale pulled one goal back with just a handful of minutes remaining, setting up a nervy finish.

Ultimately, Victory were able to see out the remainder of the game thanks to some desperate penalty-area defending in injury time, securing an invaluable three points.

The result extends Victory’s unbeaten streak to four games and ensures the promotion race continues to go down to the wire.

“Overall I suppose the stop-start nature of the game probably made it not our most fluent performance. We had to correct a few things at half-time. Once we did that I thought we played better in the second half…it probably wasn’t our best performance of the year but it shows the way our boys in different kinds of games and with different styles of play are able to adapt a lot better now than at the start of the year.”

On the triple substitution…

“I thought the substitutions worked quite well. We have a few young boys coming through and a lot of those boys coming on are coming back from injury. Paddy Hogan had a stress fracture…Nicholas Hamakiotis has had an ACL injury…Casper [Hallam] as well has had some ups and downs with illness. I thought we took the upper hand after those substitutions.”

On the team’s defence…

“Our defence was a bit unstable earlier on in the season, but they have progressively been getting better. Ryan [Lethlean] has led that which has been great to see.”

Victory travel to Waratah Reserve next Saturday 2 July to take on Doveton at 3:00pm AEST.

Victory continued their dominance in the U21s competition with a 14-0 win against Springvale.