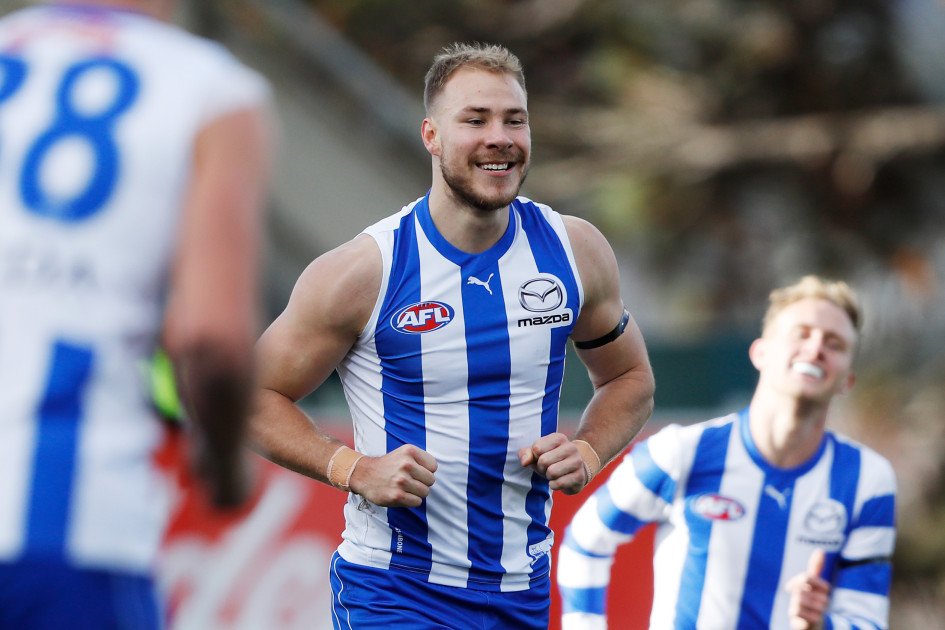 North Melbourne champion David King has questioned the deployment of Ben McKay in the Kangaroos’ 57-point loss to Adelaide on Sunday.

McKay, a defender by trade, partnered Nick Larkey in attack against the Crows, taking four marks and kicking his first AFL goal.

With McKay forward, North Melbourne’s defence struggled to contain Taylor Walker and Darcy Fogarty, with the duo combining for 10 of Adelaide’s 17 goals for the afternoon.

King was surprised to see McKay played as a forward given the threat of Walker and Fogarty and revealed a statistic that highlights the Roos’ reluctance to use young forward Larkey.

“If you’re in a rebuild phase it’s about giving players the best opportunity to develop in their best position,” King told SEN’s Whateley.

“The biggest threat in that game, and I said it in the pre-game, when there’s young players everywhere it’s senior players that separate this game, he (Walker) is the biggest threat.

“He’s at full forward and I thought, ‘OK, wow’. In isolation you go, ‘They are giving some support for Larkey’. Larkey was targeted three times for the day, so it’s not support for Larkey, it’s actually playing Larkey’s role.

“He’s not down there to make sure that second tall defender is engaged, he’s actually down there now as your targeted full-forward. I would’ve thought Larkey was your full-forward and if that other player has to be Ben McKay, which I don’t think it has to be, he’s playing centre half-forward in a different role.

“I keep saying, until Nick Larkey kicks six goals in a given game, they won’t be winning. He’s the number one asset at that footy club.

“At the other end, you’ve got the two talls kicking 10 goals between them.

“What are you doing with his development? He’s played 45 games of footy. I would’ve thought the primary function would be to have him play the best version of football at full-back.”

“If you’re about mastering your role and you’re about development, you play them where they’re going to play long-term, and you challenge them to master their role,” he said.

“Your full-back’s your full-back, he’s a leader at your footy (club), go out there and you master that role, and we’ll help you with everything you need during the week to prepare you best to beat Taylor Walker on the weekend, knowing that you’ve got Tom Hawkins the next week and you’re going to be the prime option.

“And Nick Larkey, we’re going to have to find someone to support you, but you’re our man. We’re going to kick the ball to you 15 times this week – not three. That is not maximising your assets.”

Larkey has kicked 23 goals in 13 appearances this season.

Across his 64-game North Melbourne career, the 24-year-old has booted 105 goals.

The Kangaroos (1-12) travel to Geelong to take on the in-form Cats (10-4) at GMHBA Stadium on Saturday night.