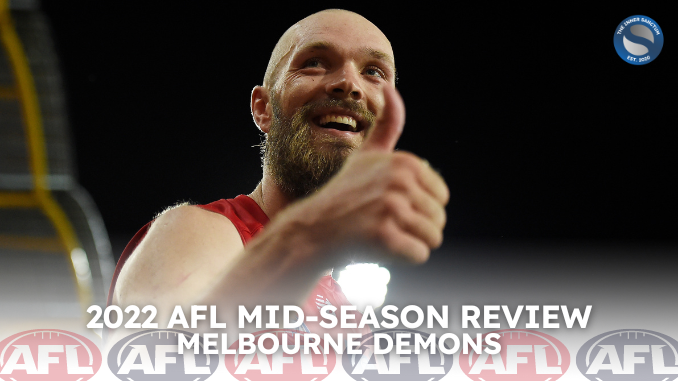 Captain Max Gawn has played another key role for the Demons this year. (Graphic: Will Cuckson; Photo: Melbourne Demons/Twitter)

As we hit the bye rounds in the AFL season, The Inner Sanctum will be conducting our mid-season reviews of all 18 clubs and assessing the first half of the season and what fortune may lie ahead.

It was a hot start for the Demons this season, winning their first 10 games of the season. However, the last three weeks have been a rocky road, losing their past three matches and dropping to second place on percentage.

Once more the Demons have done nearly everything right in the first half of the season, particularly their work in the forward half.

This season to date the Demons have averaged 57.8 inside 50s per game which has them ranked second in the competition. Their pressure inside forward 50 is also immense and despite averaging the third-lowest amount of tackles per game in the AFL (51.7), the Demons are averaging a league-high 12.1 tackles inside 50 per game.

Melbourne’s defence has also been rock solid once again, with it conceding the least amount of points so far, allowing its opponents to score 63.8 points per game.

Whilst their forward half pressure has been elite to date, their efficiency in attack has been a problem.

So far this season, Melbourne ranks eighth amongst all sides for points per game (85.5) as well as ranking in the bottom half for score efficiency (46.1 per cent). Melbourne’s accuracy in front of goal has also been a problem, converting only 45.8 per cent of its shots.

There have also been some problems off the footy field too, with the Steven May and Jake Melksham incident being the most prominent.

Making a move from any position isn’t easy, but since moving to half-back from the midfield Angus Brayshaw has taken his game to another level.

The utility is also averaging 25 disposals per game, his role down back will continue to be key if the Demons are to go deep into September once more.

AFL Mid-Season Review: Fremantle – Can the Dockers make some noise in September?

Power fan’s pressure water off a Swans’ back for Rowbottom and co.

Who needs to lift?

With Tom McDonald set for a lengthy stint on the sidelines, now is the chance for either Sam Weideman or Mitch Brown to step up and fill the void.

Brown so far has the head start on Weideman having been selected in the last couple of AFL games since McDonald last played. The ex-Bomber and Cat hasn’t kicked a goal in his first two AFL games this season. However, he has kicked 19 goals in seven matches in the VFL, with bags of seven and six coming against Sandringham and Southport.

Weideman on the other hand has played six AFL games and has kicked nine goals. However, his VFL form has been impressive, kicking 11 goals in four matches, including 10 in his last three matches against North Melbourne, Sydney, and Collingwood.

Sam Weideman unleashed his full bag of tricks against the Roos in the @VFL, slamming through six goals and marking everything 🙌

Enjoy his best work from a massive 110-point win pic.twitter.com/mNhf0W5Uu4

Whoever it is that plays as the replacement for McDonald will need to replicate their VFL form if they are to help Melbourne push for finals.

There are a couple of familiar favourites for the Demons who could lift the Keith ‘Bluey’ Truscott Trophy in Max Gawn, Christian Petracca, and Clayton Oliver.

All three have played key roles in midfield, with Gawn consistently giving his midfielders first use out of ruck whilst continuing to work hard across the ground.

Petracca has continued on from his superb 2021 season, having a massive influence in the Demons’ midfield and forward line.

This season, the Norm Smith Medallist is averaging 28.5 disposals, 4.2 clearances, 12 contested possessions, as well as a career-high 7.3 inside 50s, 8.2 score involvements, 1.3 goal assists plus nine goals.

However, last year’s winner Oliver has taken his game to another level in 2022 and possibly sits not just as the hot favourite for the Melbourne Best and Fairest, but the highest honour of them all, the Brownlow Medal.

Expectations for the second half of the year:

The second half of the season is set to be a reasonably tough one for the reigning premiers.

Amongst its opponents will be the four sides below them, with Brisbane after the bye before clashes against other top four contenders Geelong, Fremantle, and Carlton before facing Brisbane again in the last round of the season. In amongst those clashes, Melbourne will face three sides pushing for finals in Collingwood, the Western Bulldogs and Port Adelaide.

Whilst they have had the wobbles recently and have plenty of tests on the way home, the Demons will still have expectations of finishing at the top.