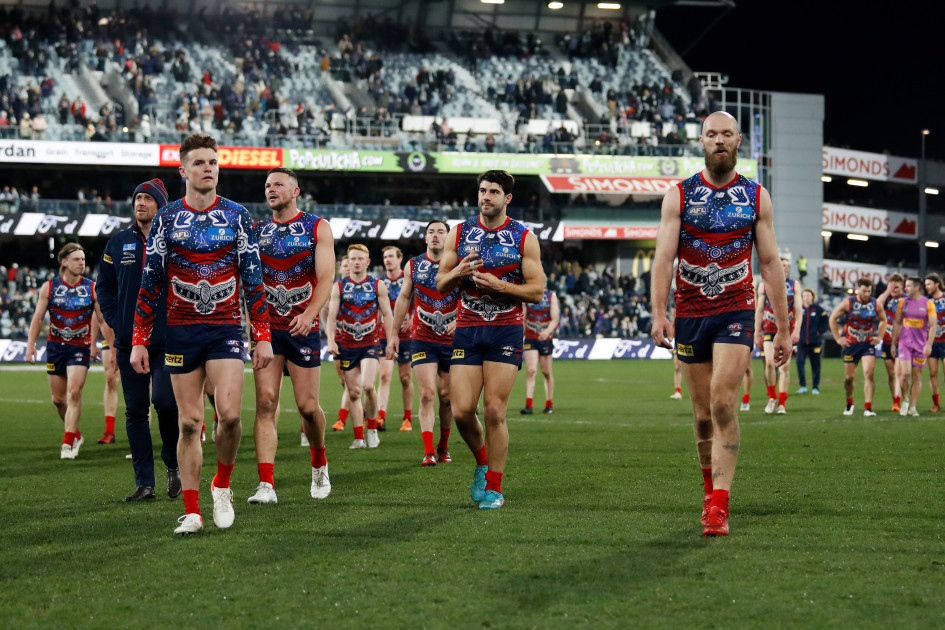 Melbourne’s kicking is a “major issue” at the moment, according to Matthew Lloyd.

Lloyd says the Demons have been in a “six-week hole” winning just two games in that period against Brisbane and Adelaide.

The reigning premiers relinquished top spot on the ladder after losing to fellow flag fancy Geelong by 28 points on Friday night.

“The kicking is still a major issue. It might be that it’s not about who’s down there (forward line),” Lloyd told Sportsday.

“I saw some kicks on the weekend that was reminiscent on what we saw years ago at Melbourne.

“They’ve been in a six-week hole … two wins, four losses.”

Lloyd wonders if Melbourne is as hungry as they were during last year’s premiership-winning campaign.

“That’s why a lot of teams don’t go back-to-back … don’t let that medal strangle you because some guys aren’t as hungry as they might’ve been,” the Bombers great said.

“(Patrick) Dangerfield hasn’t won a premiership, I know how hungry he is.

“That’s where Melbourne has to ask themselves: ‘Are we doing the things that we were doing this time last year’.”

Despite their indifferent form, Brownlow Medallist Gerard Healy still has Melbourne as his premiership favourite.

“I still think Melbourne are the favourites for the flag,” Healy said.

“I know there’s some issues. If they can’t sort them out in six, then they’re not going to win it obviously.

“But I reckon there’s enough time to get it sorted out and that’s not including Tom McDonald coming back.

“If he comes back that’s a bonus, but plan for not having him.”

The Demons (12-4) travel to Alice Springs to take on Port Adelaide (8-8) at TIO Stadium on Sunday.