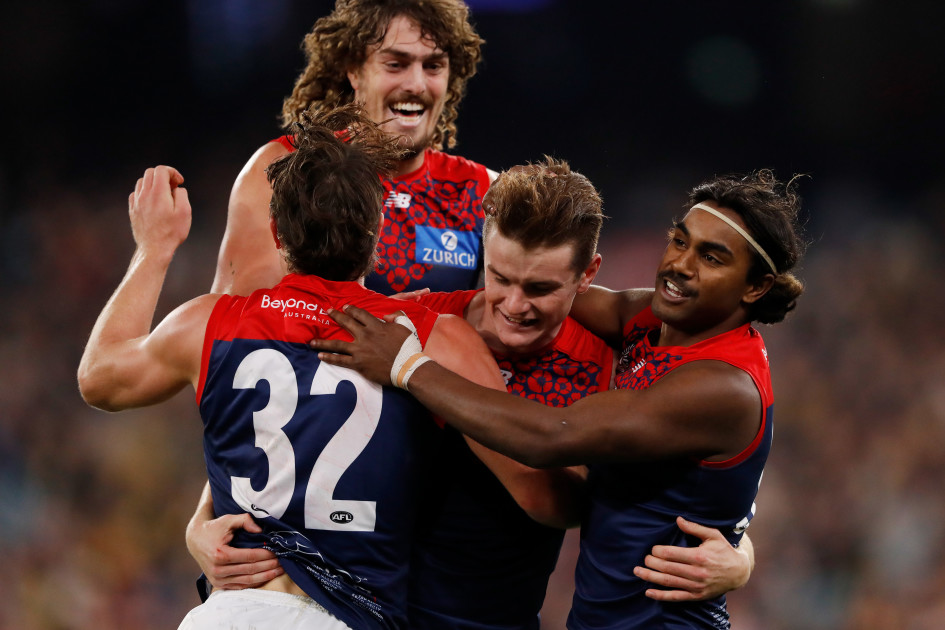 Melbourne have extended their unbeaten start to the season to six games after taking care of Richmond by 22 points in their traditional Anzac Day eve clash at the MCG.

While the final score line makes it seem like a closely fought affair, it could’ve been somewhat of a percentage booster for the Demons who had 31 scoring shots to Richmond’s 14 as inaccuracy cruelled them.

That waywardness was a feature from the get-go, as the reigning premiers battled with the Tigers throughout the first half in a scrappy opening sixty minutes.

Despite dominating field position for most of the early part of the game, it took Melbourne until the 29th minute to strike through Ben Brown as they ended up with a four-point quarter-time lead.

In the second, those woes in front of the big sticks continued as the Dees kicked a stunning 12 behinds to the main break, trailing a far more efficient Richmond side who were putting up a strong resistance as they look a 5.3 (33) to 3.12 (30) lead into the sheds.

As great sides tend to do, the Demons came alive in the premiership quarter to regain ascendancy as they started moving the ball through the corridor with ease.

Bayley Fritsch and Melbourne’s forwards looked electric as a result and the Demons began to capitalise on their chances, kicking five goals to Richmond’s two in the third.

The Dees would take a 19-point lead into the final term and they’d never look back from that moment, turning the game into somewhat of an arm wrestle as they shut down the contest as both sides kicked just one goal apiece in the last.

For the Demons, Clayton Oliver was the instrumental force behind the win, picking up 41 disposals and 13 clearances in a best afield outing to claim the Frank ‘Checker’ Hughes medal.

He was well supported by the likes of Ed Langdon (one goal, 30 disposals), Max Gawn (30 hitouts, 19 disposals) and Christian Petracca (one goal, 25 disposals).

Winning without being at their best further proved to former Adelaide coach Brenton Sanderson that the Demons are the best team in the competition and second-best may not be all that close.

“They’re obviously the best team in the competition and they are by a fair way.

“(Jake) Lever was out, (Jack) Viney was out, they (Melbourne) have just got the depth and they were quite dominant after half-time.

“Richmond just simply could not run with Melbourne’s surge that we saw early in the third quarter.”

For Richmond, Nick Vlaustin (30 disposals) found plenty of ball off half back alongside Jayden Short (29 disposals), while highly-rated draftee Josh Gibcus (12 marks, 18 disposals) stood up well against quality opposition.

The Demons will hope to go 7-0 when they face Hawthorn at the MCG on Saturday while Richmond travel to Perth to face the struggling Eagles on Friday night.