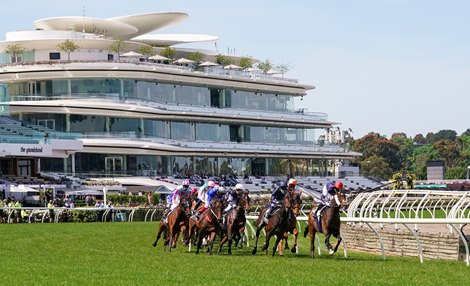 The authority responsible for the Melbourne Cup (G1) has dangled a carrot in front of Europe’s top trainers by announcing international contenders for the spring carnival will no longer be subject to the mandatory scintigraphy scan berated by Aidan O’Brien as “nuclear.”

Racing Victoria introduced compulsory pre-travel scintigraphy scanning in advance of the 2021 Melbourne Cup as part of a raft of changes designed to protect the future of Australia’s signature horserace by making it safer.

Scintigraphy is a gamma scan used to identify any abnormalities in a horse’s skeleton, such as a hairline fracture.

And in a significant revision to the rules governing international horses, Racing Victoria will now adopt a more “targeted approach” to the controversial procedure that was last year also slammed by O’Brien’s son, Joseph, following his Ladbrokes Cox Plate (G1) triumph with State of Rest.

The dual Melbourne Cup winner—successful with Rekindling and Twilight Payment—was one of a small handful of international trainers who sent horses to Melbourne last year.

However, despite enjoying a famous triumph at Moonee Valley he joined other European trainers in criticizing the new procedures and suggested State of Rest needed to be sedated four times in the space of week in order to satisfy Racing Victoria’s demands.

Most of those protocols remain in place, yet Victorian racing’s governing body has loosened the scintigraphy requirement that was brought in among 41 measures adopted after the 2020 Melbourne Cup, in which the Aidan O’Brien-trained Anthony Van Dyck suffered a fatal injury. O’Brien subsequently claimed Racing Victoria vets had carried out a “nerve block” on the 2019 Derby winner.

A statement from Racing Victoria issued on Wednesday said: “Upon recommendation of the international working group, the RV Board has endorsed the use of scintigraphy scans in a targeted manner from 2022 onwards for international horses entering Victoria via the Werribee International Horse Centre as opposed to a blanket order.

“The RV veterinary team will focus the use of scintigraphy scans on international horses where their mandatory CT or MRI scans; veterinary history; racing history; and/or pre-travel inspections indicate that the horse may be at a heightened risk of sustaining a serious injury.

“The change aligns European horses with Japanese horses where a discretionary protocol was in place in 2021 due to the absence of such technology in Japan.”

The statement continued: “The adoption of a targeted approach considers both the benefits and challenges of utilizing scintigraphy scans on racehorses in active training, along with analysis of scintigraphy results from the 2021 Spring Racing Carnival and of ongoing research into the prevalent causes of serious injuries in racehorses.”

Ed Dunlop, who had Red Cadeaux finish second in the Melbourne Cup in 2011, 2012 and 2014, welcomed the move as a step in the right direction.

The trainer said: “Anything that can make it work for all of us has to be of benefit and let’s hope this can help.

“I spoke to Racing Victoria yesterday, they kindly rang me because I was involved before, and they’re also thinking of having one vet in charge of everything and possibly having an Australian vet coming over here to examine the horses that have been nominated. It all makes great sense.

“But my opinion is that there needs to be financial assistance with the extra costs for horses. If you think of Dubai and Saudi Arabia, these all-expenses-paid-for trips, I’d be in favor of a lot of the expenses being picked up by Racing Victoria.

“There are more and more valuable races around the world that are invitational and expenses-paid-for.”

Fears for the Melbourne Cup’s long-term survival grew in Australia after six international horses died in the space of just eight runnings. The four who suffered catastrophic limb injuries—Verema, Red Cadeaux, Cliffs of Moher, and Anthony Van Dyck—represented European stables. Between 2018 and 2020 three international horses also lost their lives having suffered serious injuries in training at the Werribee quarantine facility.

Racing Victoria has additionally closed a loophole that meant imports who came into Australia through the Mickleham quarantine facility were permitted to have multiple runs before the spring carnival, differentiating them from internationally-trained horses, for whom only one preparatory run was allowed. All horses imported prior to the spring carnival will now be treated in the same way.

Outgoing chief executive Giles Thompson said on Wednesday: “When we introduced the new veterinary protocols last year we committed to a thorough process after the spring carnival to review their implementation, consider any learnings and participant feedback, and to understand any advancements in technology research that may be of further benefit.

“They also recommended enhancements to our protocols through an increase in the number of pre-travel veterinary inspections for an international horse and the introduction of new gait analysis technology along with enhanced veterinary oversight of horses traveling to Australia via alternative quarantine centers.”

Nick Williams, who was once a co-owner of 2020 Melbourne Cup winner Twilight Payment, believes the decision to change protocols was the right one.

“I think what they have done is absolute common sense and I think they’ve got the balance right. We have to protect the Melbourne Cup. There is nothing more important than horse welfare and the balance looks right now.”

Williams felt that the mandatory requirements that were introduced last year had prevented more international runners from turning up.

“It (scintigraphy) takes such a toll on the horses,” he said. “Scintigraphy is an absolutely last resort. It shouldn’t be used frivolously and I think RV have made the right decision.”