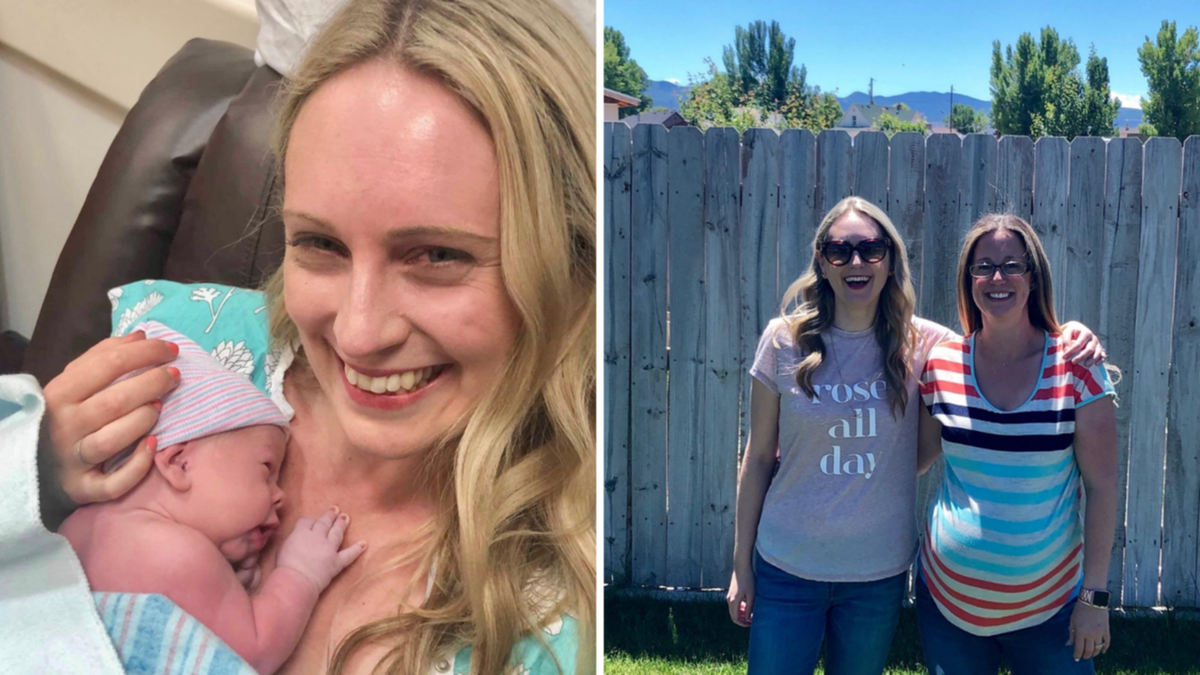 Kirsten McLennan and her husband Ryan Wilson spent more than $300,000 and 19 years trying to turn their family of two into three.

From natural conception, adoption and various fertility options, the couple heartbreakingly lost many babies along the way.

Kirsten was at breaking point – and on the edge of giving up – when a selfless mother from the other side of the world handed her a lifeline.

And the outcome of the stranger’s generosity? A happy and healthy little boy named Spencer.

“He talks a lot, he is so energic and is very cheeky,” Kirsten tells 7Life of Spencer, who is now three years old.

Kirsten during her first snuggle with baby Spencer. Credit: Supplied

As Kirsten basks in the joys of motherhood, she doesn’t shy away from the fact the road to getting there was anything but easy.

“In a nutshell, we just didn’t expect any issues,” she says.

“We were in our early 30s and thought we would’ve had baby number two by our mid 30s.”

The Melbourne couple married in 2011. Two years later, when they were 30 and 32, they began trying to conceive.

But six months down the track, they became more frustrated as every menstrual cycle came and went.

The hopeful mum saw a fertility specialist who gave advice about ovulation tracking.

But after failing to conceive naturally for a little over a year, the couple began to investigate alternative options.

“We started trying before all of our friends, and now they were all starting to fall pregnant – so it was a really hard time,” Kirsten says.

Kirsten and Ryan looked for surrogates from Canada and the US. Credit: Supplied

The pair began IUI (Intrauterine insemination), where sperm is inserted directly into the uterus using a catheter at the exact time of ovulation.

After that failed, they moved to IVF, where an embryo is created outside of the uterus and implanted.

The first embryo transfer failed but the couple was hopeful the second would stick.

And it did – just not in the way Kirsten had hoped.

Victorian man makes history with the birth of a baby boy

“They (doctors) called it a pregnancy in an unknown location – basically, I was pregnant but not in my uterus,” she says.

For six weeks, Kirsten endured a pregnancy, knowing the baby would never survive outside the womb.

So she had to terminate the pregnancy.

Three months later, she went back to the fertility clinic, hopeful for a better outcome.

But it wasn’t meant to be.

“I think like most women going through fertility struggles, there are a lot of superstitions,” she says.

“You have all these thoughts running through your head, ‘Is this meant to be? Is the universe trying to tell me something?’.”

Seeking another clinic, the couple was told surrogacy would be a more viable option.

“At that time I just wasn’t ready to accept that,” Kirsten says.

The couple opted for extensive embryo testing to try to pinpoint why Kirsten couldn’t fall pregnant.

And when each embryo came back perfectly healthy, she discovered the lining of her uterus was too thin for an embryo to hold.

Determined to give it one last shot, they tried IVF again. But the treatment resulted in a miscarriage at seven weeks.

“It was just like, if we removed me … it would just work,” Kirsten says.

Each treatment was costing the couple about $10,000 and, with no guarantee of a child, they started looking to surrogacy.

The fertility clinic pointed them in the direction of agencies, particularly in Canada and the US.

After a false start in Canada, the couple opted for a woman with whom they instantly connected – in Utah.

Spencer is now three and the family plans meeting up with Leigha in Utah early next year. Credit: Supplied

Leigha and her husband Josh had two children and had been a surrogate once before, for a couple in Spain.

In preparation, Kirsten underwent hormone treatment before doctors harvested her eggs ready to implant into the surrogate.

The first implantation failed – and a devastated and exhausted Kirsten was ready to throw in the towel.

As they effectively closed the door on surrogacy, the couple was approved for adoption, and began looking into South Korean adoption centres.

But the adoption agency told the couple that surrogacy and adoption could not be pursued at the same time.

“Adoption could take up to five years and at the end of that time you aren’t guaranteed a child,” Kirsten says.

So the couple put adoption aside and Leigha went in for the procedure for the final time.

Finally – after a nearly two decade battle with infertility – an embryo stuck.

Kirsten is helping raise awareness for infertility on her social media. Credit: Supplied

Two weeks before the birth, Ryan and Kirsten flew to Utah for the delivery of their baby boy.

Little Spencer was welcomed into the world without a hitch.

The couple, alongside Kirsten’s mum, spent three weeks after Spencer’s birth with Leigha and her family in the US before taking Spencer home to Melbourne.

Over the course of a decade, this Aussie woman lost 12 children. This is her story

The families are still close and speak often, with Leigha even sending gifts for Spencer’s birthday.

Kirsten, now 44, plans to travel back to Utah in February 2023 to catch up in person, with the lifting of COVID-19 travel restrictions.

Spencer is now three and is keeping Ryan and Kirsten on their toes.

But the couple wouldn’t have it any other way.