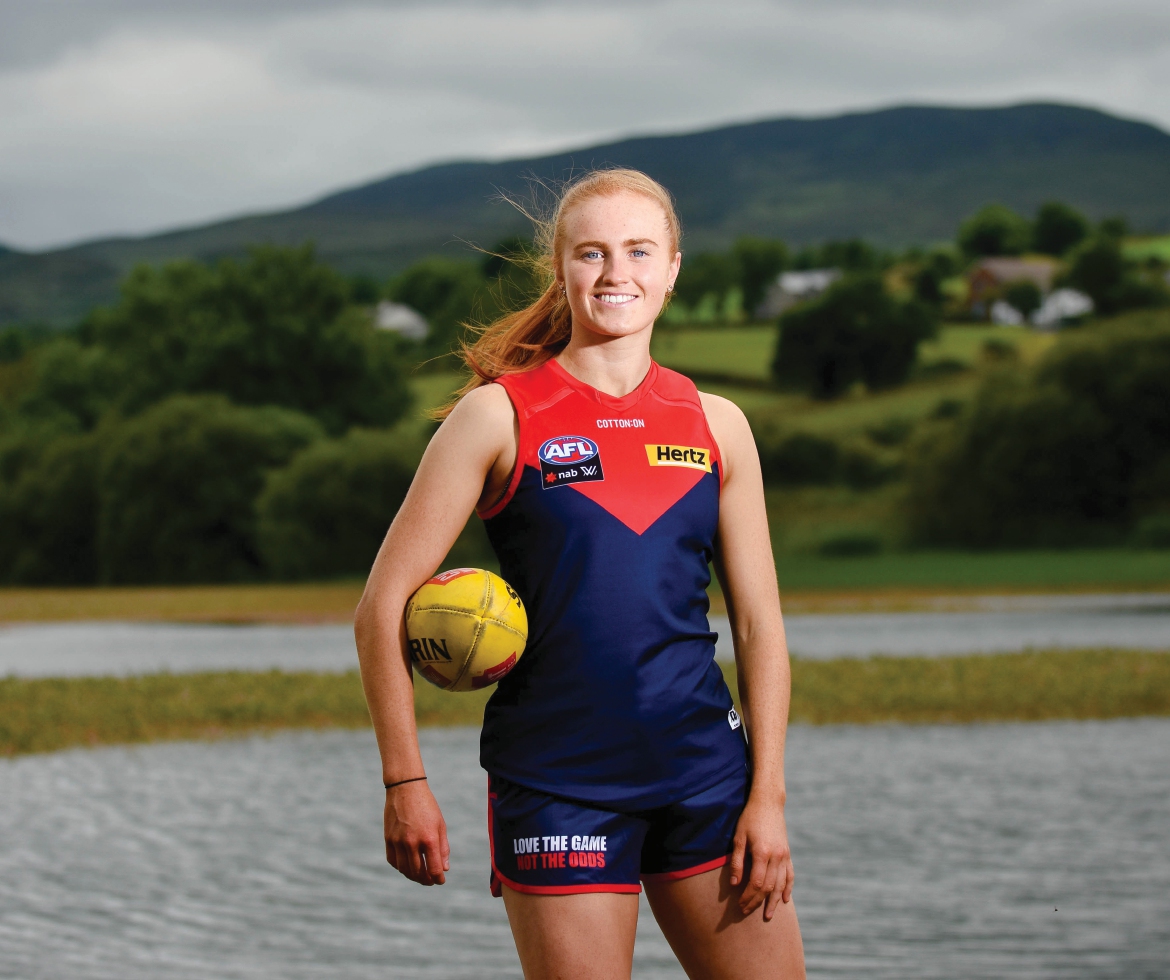 ARMAGH and Shane O’Neill’s star Blaithin Mackin’s life is set to change dramatically this week, as she becomes the latest Gaelic footballer to embark on the journey Down Under and take on the challenge of Australian Rules Football.

On June 15, Australian Football League Women’s (AFLW) side Melbourne Demons officially announced Mackin’s arrival; however, due to her commitments with Armagh, she wouldn’t join up with her new teammates until the Orchard’s championship run was over.

Unfortunately, that came sooner than hoped, with Kerry defeating Ronan Murphy’s side by four points last Saturday, but once the heartbreak of that defeat begins to dissipate, Mackin can look forward to the opportunity of a lifetime.

“I’m buzzing to be honest; it seems like a great sport and a great place to go play professionally,” she said ahead of her arrival in Melbourne.

“I’m excited about the challenges that it will bring, with the different set of rules, the different ball and everything else; so, I’m excited to challenge myself and see if I can push myself on a bit with it.”

As for how the opportunity arose, Mackin said that despite the fact she wasn’t actively seeking out a career in Australian Rules Football, she always kept an open mind, and once the idea was floated, her interest was piqued.

“I had sort of considered doing it, even before I was contacted,” Mackin admitted.

“I had seen so many other girls going out to try and give it a go, and you do think ‘is this something I could do, or something I want to do?’ I didn’t go out personally seeking for it to happen, but I always knew that I would be open to giving it a shot.

“I got a message from Mike Currane, who is an AFLW coach and AFL coach. He works with the Irish girls here, and he dropped me a message one day to see if I was interested, and once I said that I would be, that sort of got the ball rolling.

“He looked after getting my name out to the Australian clubs, and he took me for skill sessions to get used to the ball, and to see if I was capable of playing. There are similarities between it and Gaelic football, but you definitely have to try things out with the oval football, because it has its challenges.

“In my mind the worst thing that could happen was not getting an offer from any clubs, and that wouldn’t have been the end of the world. So, I just took the chance, thinking that if it goes somewhere, it goes somewhere, and thankfully then, I got interest from clubs.”

With several offers on the table, it couldn’t have been an easy choice for Mackin when selecting her new team, but owing in no small part to the pre-existing Irish connections Melbourne have already developed, her mind was made up pretty quickly.

“Melbourne were really the one team that stood out to me straight away,” said the Shane O’Neill’s icon.

“They were very good to me, and they gave me the opportunity to continue playing with Armagh, which I really appreciated. I had said from the very start that I wasn’t going to leave halfway through the season, and that’s what really attracted me to Melbourne.

“There are lots of other factors too: the facilities are top class, and the people I have met, even if it has only been over Zoom, they all seem brilliant. Obviously, Sinead Goldrick from Dublin is there, and that’s another good thing, because it’s nice to have somebody there, who has already done what I’m about to do.

“They have had Niamh McEvoy and Lauren Magee as well as Sinead, and both of them have been in contact with me. Everyone is there to help me out, so I know the dos and don’ts, to prepare me before I go out. Sinead especially has been great, so I’m very thankful for that.

“Also, the players from over in Australia have made me feel very welcome and the whole process has been really enjoyable.”

If the warm welcome from the players wasn’t enough to turn Mackin’s head, Melbourne showed just how committed they are to the Camlough woman, when their head coach Mick Stinear travelled over from Australia to visit her family home, and he took her for a one-to-one session at Shane O’Neill’s pitch.

“The coach of the team Mick travelled over to Ireland to meet me, which was one of the main things that attracted me to Melbourne,” explained Mackin.

“The fact that he was willing to do that and travel all this way to Ireland was incredible. He came here for the Ulster final and watched the game, before coming down to meet my family at the house, and he took me down to the pitch for a session.

“So that definitely was one of the main things that attracted me to Melbourne, and even for my family as well, it was so important for them to meet a person from the club, because obviously I’m travelling a brave distance from home, and it’s good for them to know somebody from the club.

“It may have only been an hour-long session, but it was good to get talking to him, and to meet him in person.”

Despite Australian Rules games being broadcast on BT Sports in the UK and Ireland, the vastly different time zones mean that it isn’t always convenient to watch the games live in this part of the world. Despite that, Mackin has been doing her best to get watching the sport as much as possible, as she gets to grips with the new rule set.

“With my nature I would watch most sports anyway, and especially whenever the Irish girls were going over, I began to watch it,” she said, of her knowledge of the game.

“Now, I mightn’t have been getting up at three in the morning to watch the games, but I would have watched the highlights and I follow the AFLW Ireland page, just because it’s good to see how the Irish players are getting along, and it is a good sport to watch.

“Since I have shown my interest in going over, I have tried to watch more full matches, and I’m still getting through the process of learning all of the rules, but with the help of everybody over there hopefully I’ll be able to grasp on them as quickly as possible.”

As long as Gaelic games remain amateur, a debate will take place over whether or not the players should be paid for their services. The spotlight on ladies footballers has only increased in recent weeks, after a recent article from the42.ie’s Sinead Farrell uncovered that the average female inter-county player spends €1,450 per month in expenses, which does not be reimbursed, to play the game they love.

STAY….Blaithin Mackin was always going to stay until the end of Armagh’s season

Whilst Mackin is happy to play Gaelic football, even if it burns a hole in her pocket, she did concede that the professional element that comes with playing in the AFLW was hugely attractive to her, in her decision-making process.

“I’m getting to play a professional sport, and I think for any athlete that’s the dream,” Mackin affirmed.

“If you could be a professional Gaelic footballer, that would be brilliant, but on the flip side of that, the amateur side of Gaelic is the best thing about it; the fact that you just do it for the love of it.

“Because I’m new to Australian Rules, it helps that it’s professional, because it gives you so much more time to focus on the sport itself. When I’m over there, I might decide to pick up a job and I have no problem doing that, but the good thing is that you get to focus 100 per cent on the sport that you’re playing.

“But even more so than money, it’s the lifestyle that being a professional allows you to have, that makes it attractive. I would play Gaelic football if I was out money or whatever – I play it for the love I have for it. But there’s only so much time that you can put into the sport over here, which can be a struggle for Gaelic players whilst they’re maybe working a 9-5 job during the week.

“It was a nervous thing, whenever I had to tell my family, and my coaches and my teammates that I was going, but the response I received was brilliant from everybody, and that was the main thing they said to me: ‘you’re going to improve so much as a player when you have those resources available to you.’ From what I have been told, it’s hard not to thrive in the environment that they provide for you.”

As one can imagine, the prospect of telling her family, friends, teammates and coaches that she was heading Down Under would have been daunting, but Mackin said that her decision has been met only with positivity.

“I’m very grateful for the support,” she said.

“I think anyone would sort of feel bad, when they feel as though they’re letting people down, but I’m so lucky that everybody has been so supportive, and they’re all delighted for me. They appreciate that it’s an opportunity that you simply can’t turn down, and they all want me to go out and do as well as I can.

“From my family it’s the exact same; obviously they’re sad that I’m travelling so far away, but having their support has made the whole thing so much easier, because the initial telling of it to people is the scariest part, but everybody’s first reaction was so supportive.”

For Mackin the idea of not letting anybody down was crucial throughout the whole process, and as her commitment to Armagh showed, she definitely succeeded in that regard.

“Whenever I was first contacted, I was asked as to whether I would be happy to go out this year or wait until next year. I said I was happy to go this year, but I don’t want to leave Armagh halfway through,” said the gifted midfielder.

“To be honest, if I had to leave in June, I probably would have turned it down and maybe try and hold out until next year. The offers started coming through just after the League had finished, and I definitely wasn’t going to leave Armagh halfway through the season, when I had said that I was going to commit at the start of the year.

“To leave halfway through would have been very bad on my part, and to be fair, from Melbourne’s side they appreciated that, and they could see that my commitment was there, and the decision was very well respected.”

Now, with her bags packed and her flight booked, the dream has become a reality. A new lifestyle, a new culture and a new climate awaits, and Mackin is ready to embrace every step of the journey.

“That’s something I’m very excited for. Travelling is something that you can’t take for granted,” she enthused.

“I don’t know if I would have ever got the opportunity to see Australia if it wasn’t for this, so it’s something I hope to make the most of, and enjoy while I’m there, because you never know how long it will last. It will take a bit of adapting, especially the weather, but I think that the weather, and the lifestyle and culture are things that you have to embrace.

“The main thing will be focusing on doing well in the sport and nailing that down, but it will be important to enjoy everything that being in Australia brings.

“Plus, the Irish community in Melbourne is very strong, and I think that no matter where you are in the world, the Irish stick together and we look out for each other.”