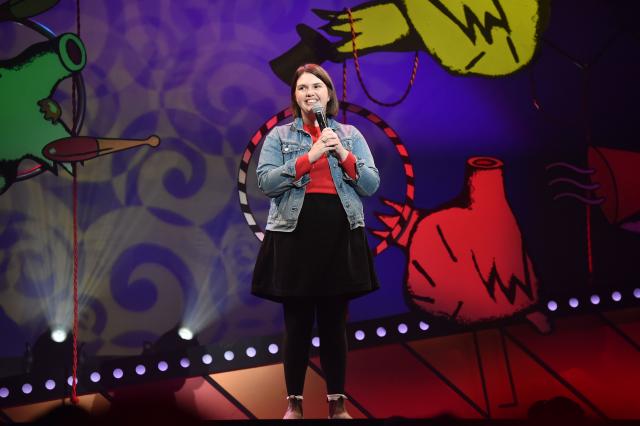 Prue Blake will perform at the Pilbeam Theatre as part of the Melbourne International Comedy Festival Roadshow.

Rising comedy star Prue Blake says the Melbourne International Comedy Festival Roadshow will be an “all killer, no filler” night of laughs.

The “underachiever by choice” will join fellow comedians Bev Killick, Takashi Wakasuki, Blake Freeman and Oliver Coleman as they hit the highway to deliver the best bits from the 2022 festival to the regions.

The Queensland leg of the tour kicked off last week in Cairns, with the crew dropping into Rockhampton’s Pilbeam Theatre on Friday, 6 May after a three-day break in Airlie Beach.

Growing up in Hervey Bay, Prue said she never saw herself becoming a comedian.

“I always thought I was such a serious person, I didn’t realise I was funny until I started working in an office,” she said.

“I hated working full-time and would always be cracking jokes to try and get out of it. And of course you have a nice captive audience but these people are trapped and they also want a break from work so they’ll laugh at anything!”

Prue has been a standup comedian for about three years, having “fallen into it” after taking sketch and improv classes to make friends.

“I thought it would help me get a boyfriend and then it ruined my whole life,” she joked.

“I got bitten by the comedy bug and couldn’t stop.”

She described her humour as cheeky and observational – “putting into words the things that people have always thought but never managed to convey clearly.”

“Sometimes it might just be a cheeky dirty joke, there’s something for everyone.”

While most of her past gigs have been in Melbourne, Prue wants to get on the road more this year to make up for time lost during the pandemic and has performed recently in Sydney and Brisbane.

Following months of on-again, off-again lockdowns, she said she was looking forward to her visit to Rockhampton and her “first proper tour” to the regions.

“I won the RAW Comedy competition last year and this tour is like the victory lap I never got to have because we pretty much went straight back into lockdown,” she said.

“I used to work as a placemaker and did a lot of travel to regional areas then, it was like a town planning job, so it’s nice to be back in the regional areas.

“I feel like my new goal is to perform in every town hall across Australia.”

She said she believed the Pilbeam Theatre show would live up to previous tours.

“I think it’ll be a hot show. Everyone has a different style of comedy with each of the five comedians doing their best 15 to 20 minutes – a nice, short, sharp little taste.”

The Melbourne International Comedy Festival Roadshow will kick off at 7.30pm on Friday, 6 May at the Pilbeam Theatre with tickets available at seeitlive.com.au or through the box office.