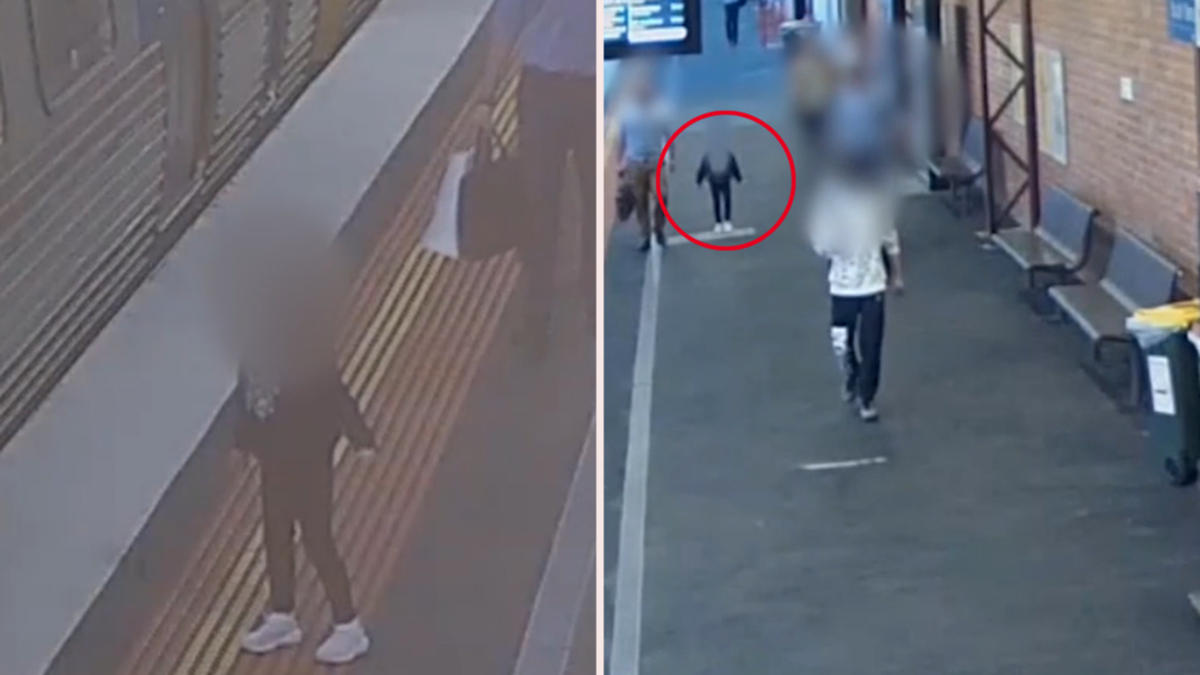 The terrifying moment a five-year-old girl was left stranded at a Melbourne train station without her mother has been captured on security cameras.

As seen in the video above, the little girl jumped off the train carriage at South Yarra station last month and threw her hands in the air in what appeared to be excitement.

But that quickly turned to fear as the train doors closed before her mother, pushing a pram, could follow her.

The girl runs back towards the doors to try and get back on board, but the train starts to leave the platform.

A man who had just gotten off the train spots the little girl trying to grab the moving train and moves her to safety.

The moment the child realises the doors have closed before her mother could get off the train. Credit: Victoria Police

The good Samaritan has been praised for raising the alarm with a Protective Service Officer (PSO) at the station.

The footage shows two officers squatting down to speak with the little girl and taking her hand.

They both then sit with her at the station seats.

Two officers take the little girl’s hand to wait with her for her mother to return. Credit: Victoria Police

Minutes later the little girl’s mother runs from the platform and is reunited with her daughter with a hug.

She is comforted by the officers before the much relieved mother and daughter continue on their way.

On Tuesday, the mother will meet with the officers to thank them for their assistance.

The little girl’s mother runs from the platform and is reunited with her daughter with a hug.  Credit: Victoria Police

During the pandemic, a lot of PSOs were redeployed to help with hotel quarantine and patrolling the border, but they have now returned to all train stations.

“With more people returning to the office and enjoying nights out in the city, now is the time to have PSOs back at all stations,” Acting Superintendent Craig Thompson said.

“They will be doing what they do best – detecting and deterring crime to make sure people can travel with confidence.

“We know a PSO presence makes people feel safe and that is our top priority.”

Twitter accepts Elon Musk’s $61 billion bid to buy the platform. Here’s how it could change forever