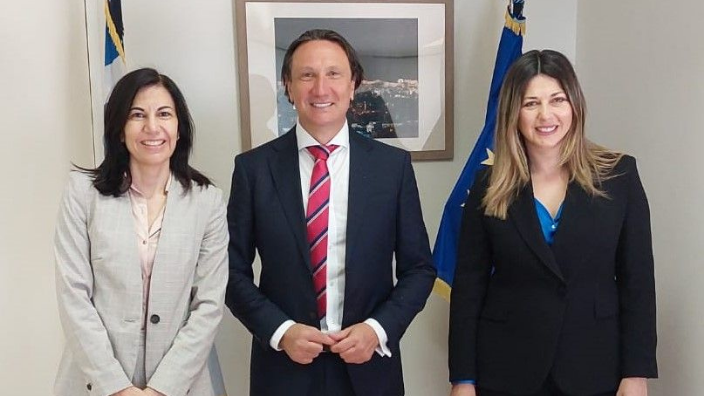 The move for an office of the Greek National Tourism Organisation (EOT) in Melbourne and hopefully at the Greek Community of Melbourne’s 15 storeys centre seems closer.

The President of the Greek Community, Bill Papastergiadis, in a meeting he had with the Greek Deputy Minister of Tourism, Ms Sofia Zacharakis, and the Secretary General for Tourism Policy, Ms Olympia Anastasopoulou, said that the issue of expanding Greece’s profile was discussed.

Bill Papastergiadis said: “I was impressed with the interest that the Deputy Minister took in our discussions.”

“The Deputy Minister explored all the issues we discussed carefully and analytically. We spent over a an hour with the Deputy Minister and the Secretary General on all matters relating to persons wishing to travel to Greece including how camps in Greece for Australian children could be coordinated,” Mr Papastergiadis added.

Mr Papastergiadis also stressed that “it is important that Greece takes the step to open an office of EOT in Melbourne given the strong cultural and economic ties between the two countries.”

“The absence of such an office makes it difficult to work on coordinating the expansion of flights with new carriers such as Qantas as well as highlighting the multiple attractions that Greece offers,” he said.

“Greece has a rich history and culture that should form part of the narrative of all persons who want to travel there. Expanding the image of Greece beyond the normal stereotypes of its beaches and warm summers is important.

“Greece has so much to offer all year round and holds an important place in the hearts of all Greek Australians. It’s important to build bridges between the two countries and an EOT office in Australia is an essential part of this.”

Deputy Minister for Tourism, Ms Zacharakis, commented: “In the meeting with the President of the Greek Community of Melbourne, Mr. Bill Papastergiadis, where the investigation of ways of further strengthening the cooperation between the two countries in the field of tourism was discussed, as well as the relations between Greece and Australia, are characterised by strong historical ties, especially through the Greek Diaspora and the strengthening of bilateral relations at all levels.”

”In fact, the bilateral cooperation in tourism is of great importance this year, given the opening of Australia after 2 years, and the ability of Australian citizens (expatriates and not only) to travel to Greece, which is expected to contribute significantly to the overall tourism recovery of the country.”

She pointed out the fact that “the procedures for the establishment of an EOT Office in Melbourne were initiated, while the framework of synergies reagarding the enhancement of business tourism investments and especially of tourist ports was discussed, as well as the strengthening of direct air connections between Greece and Australia.”