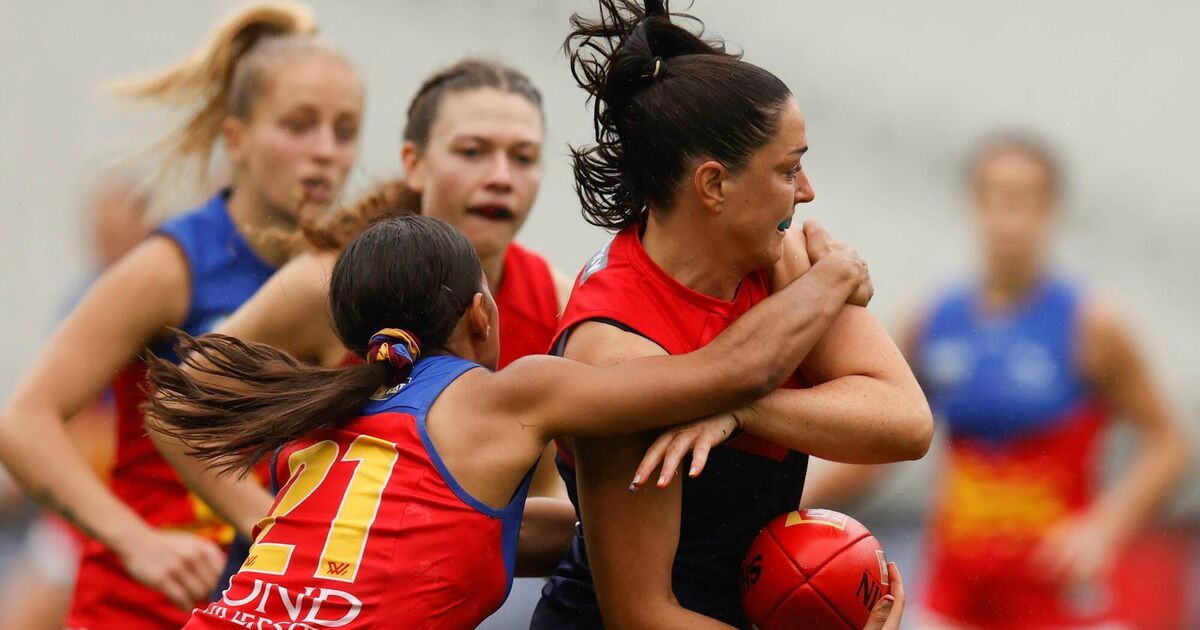 Melbourne will travel to South Australian territory next Saturday to face the 2019 Premiers, Adelaide Crows at the Adelaide Oval in the 2022 AFLW Grand Final.

Melbourne head into their maiden AFLW Grand Final after a historic 33-29 win over the reigning Premiers, the Brisbane Lions. After 2,952 men’s Aussie Rules games at the Melbourne Cricket Ground, 6,436 spectators watched the first ever AFL Womens game at the home of Australian Football.

Dees forward Alyssa Bannan was undoubtedly player of the game with three goals to her name, with her quick change of pace fending off the Lions defence at crucial stages. Bannan opened the goal scoring in the sixth minute of the second quarter before Tahila Smith replied three minutes later. At the half time siren, it was 1.2 (8) each in drizzly conditions.

Dakota Davidson got the opening goal of the second half for the visitors inside three minutes before the hosts went on a goal spree. Bannan with her second major, Lauren Pearce and Eliza McNamara with goals for the rest of term with the only reply being an Orla O’Dwyer (five disposals) behind meant an 11 point lead for the Dees at three quarter time.

O’Dwyer at this stage was finding it tough to get clean possession for start a Lions attack. But to her credit, Dublin woman Sinéad Goldrick (six disposals) did a huge tagging job throughout the second half to nullify the Tipperary woman’s threat.

Bannan scored her third goal of the game in the second minute of the final term and the lead looked unassailable but goals from Sophie Campbell and Greta Bodey made it an interesting final ten minutes.

The Dees held out the late pressures as Brisbane pushed forward but the final siren came to their rescue to send them forward to their first ever time to compete for a grand new flag in the women’s game. Lauren Magee didn’t feature for the Dees but does hope to be involved in next week’s final.

Adelaide Crows had a 40-26 win over the Fremantle Dockers in the second Preliminary final in front of 5,452 at the Adelaide Oval to reach their second grand final in successive seasons Crows legend Erin Phillips got the opening goal after two minutes before a superb reply from Fremantle, finished off by Mikayla Hyde. A Crows goal from Caitlin Gould in the 12th minute was enough to push the home side into a 13-6 lead at the quarter-time siren.

Adelaide controlled the opening exchanges of the second term with goals from Stevie-Lee Thompson and golden boot winner Ashleigh Woodland and they extended the lead out to 19 points at the midway point of the term. Two quick replies from Ebony Antonio and Airlie Runnels late in the half saw the margin reduced back to seven points at half-time.

Adelaide turned on the taps at the start of the second half, laying tackles on the Dockers, winning more clearances from ball-ups and controlling midfield more efficiently.

A goal from Danielle Ponter early in the third term enforced Fremantle to start taking chances they may not have taken. They gave too many interceptions away to Crows defenders handing them easy possessions including Ailish Considine (six disposals) who picked up a crucial interception in the term. The Crows extending their lead to 15 points at three quarter time.

Docker’s Emma O’Driscoll got an early goal to get her side back into contention in the final term. Leitrim’s Aine Tighe (eight disposals) had a titanic tussle with Crows defender Sarah Allen throughout the game and did have a set shot from 35 metres but pushed it for a behind. However, Ashleigh Woodland did get her second goal of the game in the 7th minute of the final quarter and from there, Crows held out Dockers pressure to ease to a 14 point win.

Adelaide host the AFLW Grand Final for a second season in a row at the Adelaide Oval next Saturday. Game starts at 2:30am Irish time.