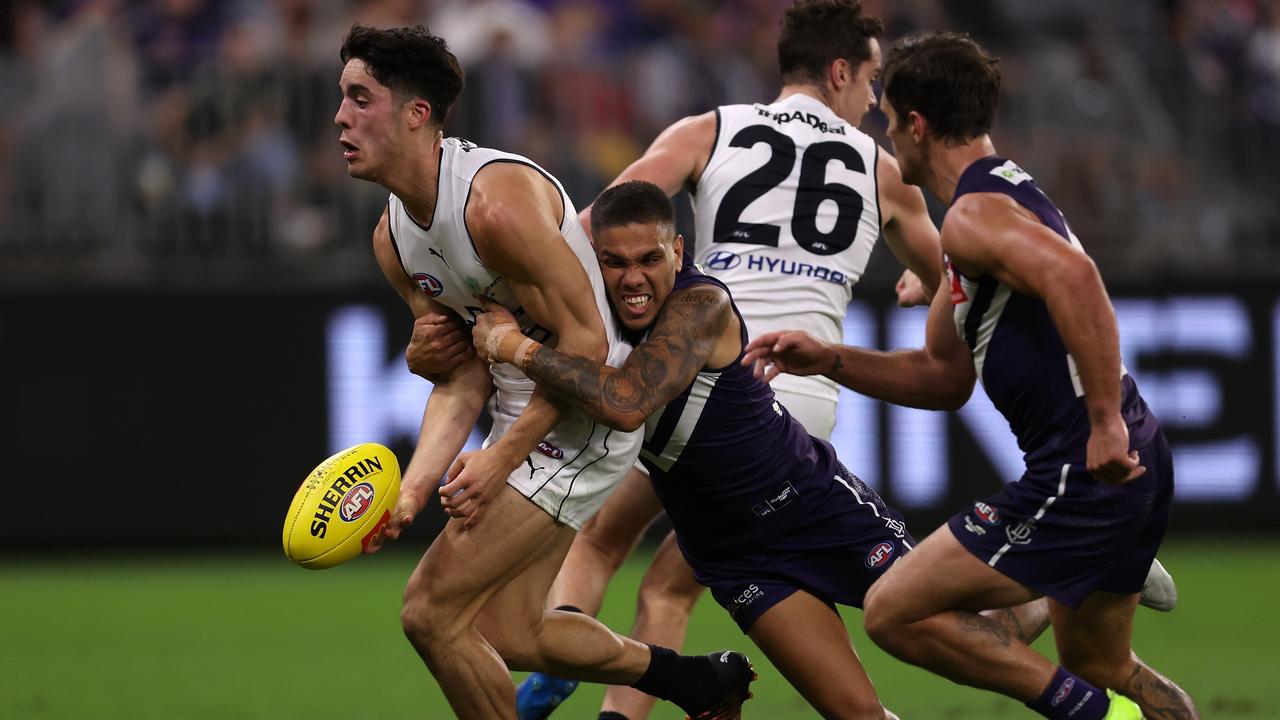 Fremantle’s “unsexy” brand of football may be a “nightmare” for opposition teams, but statistics show the Dockers are now Melbourne’s biggest challenge in 2022.

The Dockers are sitting in second spot on the AFL ladder, with five wins after six rounds.

It’s the club’s best start to a season since their minor premiership in 2015 under Ross Lyon.

Now with Justin Longmuir at the helm, Fremantle’s focus on speed and pace is paying off with their game style described by Fox Footy’s Garry Lyon as “great to watch”.

“It stacks up beautifully,” Lyon said On The Couch.

“I watched on the weekend, every time I looked at it, all I saw was pace – absolute break-neck pace of blokes just chasing.

“They are blindedly quick – they are stacked and loaded with these blokes. You can throw (Lachie) Schultz into that mix, (Nathan) O’Driscoll whose times in the draft camp were off the charts.

“How exciting for Justin Longmuir – if your head’s in the right spot, there won’t be an easy footy for an opponent.”

On The Couch panellist Nick Riewoldt said players had confidence to take the game on, knowing there were teammates to quickly arrive.

“You can go forward with confidence because you know the speed of the players will get there – look at them go!” he said.

“They’ve got a good thing going – it’s unsexy. It’s a bit of system and effort from the Fremantle guys.”

Fremantle are currently leading the competition in points differential from turnovers and defending ball movement.

Acres kicks one from a RIDICULOUS angle | 00:34

They sit second behind Melbourne for points against and third for opposition scores per inside 50.

“Fremantle are the closest to Melbourne statistically.

“Their game stacks up against Melbourne – I can’t wait to see them play against each other.

“Against Melbourne, the greatest challenge is how do you handle Gawn and Jackson? Fremantle have got Darcy and Lobb – I think they’d be able to compete.”

Fremantle will travel to Geelong to take on the Cats on Saturday, before returning to Perth to face North Melbourne.

They are then scheduled to face the Suns and Pies before that Melbourne blockbuster at the MCG on May 28 in Round 11.