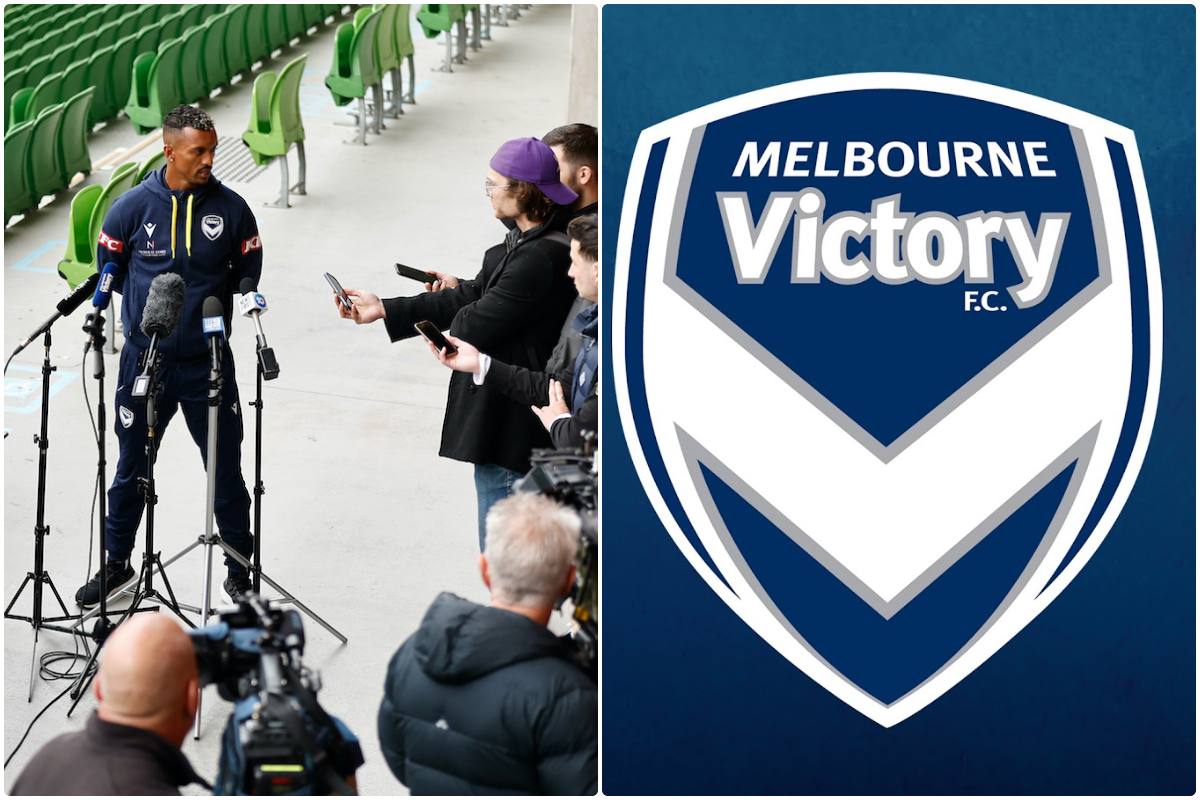 With Manchester United’s next opponents being Melbourne Victory on the 2022 pre-season tour, I decided it was as good a time as any to call upon a fan of the opposition to give us some insight from Down Under.

I reached out to Andrew (Clarky) from the For Vuck’s Sake podcast – an independent platform for Melbourne Victory fans – and he was kind enough to full me in a bit on his club and what it means to have Manchester United in town.

Without further ado, on to the Q&A.

Give us a summary of Melbourne Victory and your podcast.

Clarky: “Melbourne Victory was the first Melbourne based team when the A-League was launched back in 2004. It is one of the most successful clubs in the A-League with 4 Championships, 3 Premiers Plates and 2 League Cups (We do not have a first past the post system, there is a regular season and a playoffs similar to the MLS. So a Championship (affectionately known as the toilet seat because of its appearance is awarded to the winner of the playoffs and the Premiers Plate is awarded for finishing first in the regular season.)

“Over the history of the league it’s had the highest average attendances and its support is known to be the most vocal. The “Active Support” (Standing/Singing section) is far and away the best in the league. The video below was taken from the last Melbourne Derby against Melbourne City (yep, they’re part of the City Football Group).

“We have had a link with the reds before Nani. Scotsman Grant Brebner who spent four years at United’s youth setup played over 120 games for the Melbourne Victory as well as managing the club in 2020/21, however that also coincided with Melbourne Victory’s worst ever season finishing last. This was not all Grant’s fault, the club was a shambles and he was sent to the slaughter. Regardless of this Brebs is still held in extremely high regard amongst the fans at the club.

“As for the Podcast, For Vuck’s Sake, it is the only independent fan made podcast. We are now entering our 8th season. As I mentioned previously our intention is always to stay fiercely independent and to be a voice for the fans but also the club has started to finally engage with us as the new CEO and Football Operations Manager clearly see the value in fan driven media.”

Do fans care about these pre-season matches or does it mean a lot more that Manchester United are coming to town this year?

Clarky: “Generally A-League clubs do pre-season matches against local second division sides usually at these clubs home grounds to try and inject some money into grass roots local football or closed door matches against other A-League opposition. So pre-season has never really been a huge deal for a lot of fans, however pre-pandemic Australia and Melbourne Victory have played the likes of Juventus, Tottenham and Liverpool before.

“These European visits are a tricky one for A-League fans and we could probably have a discussion for a few hours on the reasons but I’ll try to boil it down a bit.

“- Firstly because of the premium price drives away a lot of A-League fans unless they are fans of the visiting European based side.

“- Secondly there is a strange divide in Australia with football and a large number of football fans not really willing to get on board with the local leagues such as the A-League because “The standard isn’t as good as the Prem or Serie A”. The rusted on fans of the A-League (Who generally are fans of European football clubs as well) tend to call these people “Eurosobs”.

“- Thirdly a lot of A-League fans will look at the time and money invested in these European team tours and question if money could be better spent improving things like infrastructure & coaching etc. To cut a long story short there are a lot of problems with the Australian football pyramid and the costs for youth football are outrageous forcing many parents to push their kids into cheaper sports such as Australian Rules Football, Rugby and Cricket. Which really hurts the development of our National Team that despite qualifying for a 5th straight world cup is probably the weakest it’s been since I’ve been watching football.

“- Lastly, there is always a bit of skepticism around if these European teams will bring out all their stars. Historically there have been many big name players pulled out on the eve of travel halfway across the world. Obviously the current situation with Ronaldo is slightly different, but even before he decided to throw his toys out of the pram I wondered if they were going to get Ronaldo on a plane at 37 years of age to travel to the other side of the planet for this.

“However, all that said is not all negativity there are still a huge number of A-League fans that also enjoy European football and will attend Friday’s game for example. The Reds are still as big as it gets globally and they will always pull a crowd wherever they go. There is still a huge appetite to see big European teams. Barca played against an A-League All-Stars team in May and there were 70,000 in attendance.

Former United winger Nani recently joined Melbourne Victory. What would you like to see him do for the game in Australia?

Clarky: “The A-League is a salary capped league. Nani has been signed as a “Marquee” player which means his wages fall outside the salary cap. We also have a limit on the amount of international players any team can sign. These are called “Visa Spots”. The usual goal for these Marquee players is to inject some real quality into a side. The marquee itself doesn’t necessarily have to be a massive global name but there have been a couple in the past. Nani is by far the biggest Marquee signing the league has seen since Alessandro Del Piero played for Sydney FC in 2012.

“So the ultimate goal for Nani is to add quality to our squad. We bounced back after our worst ever season in 2020/21, to finish second in the league and narrowly miss out on the “Grand Final” last season. Nani represents a signing of intent, to go one step further this year. Melbourne Victory is a team used to winning things, and the club is working hard to get back to that stage.

“We have a number of young attacking options that occupy wide areas and we see Nani as a real asset to help develop and mentor these young players.

“Another positive is the early arrival of Nani, historically a lot of these Visa players or Marquees come to the A-League thinking it will be a holiday and rock up out of shape or with the wrong attitude. Nani seems like the complete opposite. He’s here early, he’s already training with the squad and from what I saw from training today he could absolutely see some minutes on Friday.

🚨🚨EMERGENCY PODCAST🚨🚨 We’re back with a bang! The signing of Luis Nani deserves a good ol’ fashioned For Vuck’s Sake Emergency Podcast. We talk about our new marquee man as well as covering all the other ins and outs to date.

“If he brings similar form to his time at Orlando (30+ goals and 18+ assists in 80ish games) he should be a big success here.

“There is a bit of skepticism from some quarters about signing players like Nani in their mid 30s, but these are people who are probably a little bit delusional about where the A-League sits on the world scale (that said, if you’re going to compare the A-League to the Prem of course it looks gash but players with some of the most stacked CVs have soon realised the teams are here to pla. People can see it as a bit of a sugar hit, a temporary wow factor that won’t retain fans after they’ve gone, one to rope in the eurosnobs. To me this feels like it couldn’t be further from the truth with Nani. He seems committed not only to helping Melbourne Victory win, but to raise the overall level and perception of the league and as I mentioned before, to mentor up and coming players. It genuinely feels like he wants to leave his mark here.”

Which Premier League club is most popular in Melbourne?

Clarky: “Manchester United and Liverpool for sure. Australia has always had a huge population of fans for both these sides. When Liverpool played Melbourne Victory back in 2013 at the MCG there was a crowd of 95,000. When United was last here in 2013 as well they played an A-League All-Stars Match in Sydney and 84,000 attended. United won 5-1 (JLings with a Brace, Welbz with a Brace and RVP with the 5th).”

Who are Melbourne Victory’s key players?

“Nick D’Agostino – 24 Year old striker. Real blood and thunder type operator. Super tough and ruthless at pouncing on mistakes Roderick Miranda – 31 Portuguese CB. Been on the Books of Benfica, Wolves, & Olympiacos Ben Folami – 23 Year old winger. Was in the youth setup at Ipswich town Jake Brimmer – 23 year old #10. Was at the Liverpool youth setup for a couple of years before returning back to Australia. Won the award for the league’s best player last year (The Johnny Warren Medal).”

How will your manager, Tony Popovic, approach the game against United?

Clarky: “Popa will take the opportunity to test his squad against a high level of opposition. Senior players and developing kids will more than likely get a go. For Melbourne Victory this season as mentioned before is about continuing to improve and to build on the foundations that Popa has put in place from last season. Popa during his playing days (which included 123 appearances for Crystal Palace) was a zero compromises Centre-Back. That zero compromise (No shortcuts) attitude filters through to the team he manages. His teams are usually built from the back (Victory had the best defensive record in the competition last year) but looks to transition the ball to wingers. Folami & D’Agostino love to run at defences. The team will definitely be going out there with the mindset to not be training cones (albeit the gulf in class). This friendly also provides good preparation as we have a Cup game scheduled for early August.”