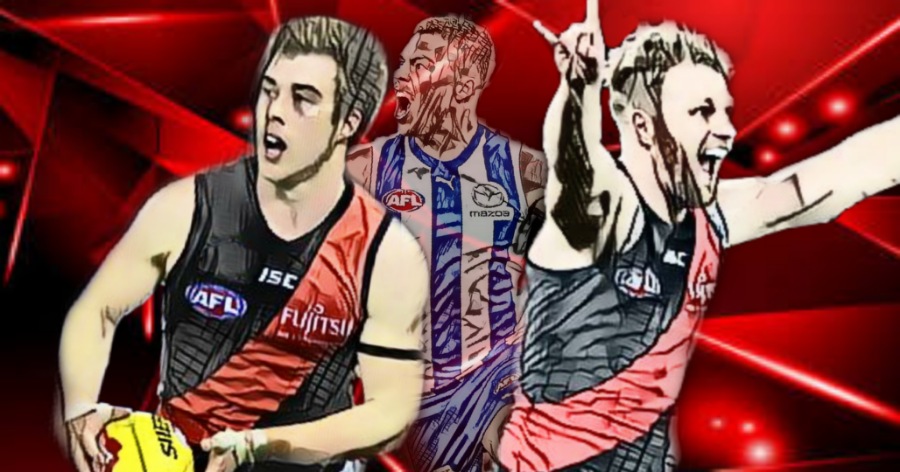 The Sunday Twilight slot in Round 20 was reserved with two of the league heavyweights of yesteryear – Essendon and North Melbourne. The Bombers have been playing speed bump in recent weeks, upsetting contenders as they head towards September, and North have been… well, struggling to score and are limping to the line.

As they headed under the dome, who would rise above the other and take the four points? Is there much we can learn from this clash? Keep reading for the things that mattered.

Coming into the game, with the above numbers, you’d expect the clearance battle to be close. However, this was far from the case as North Melbourne held sway at the coal face and dominated the clearance differential (+20). However, while this number may usually be a damning statistic, it shows that stats alone don’t always tell the tale. As someone who has worked in stats, it’s not always fun to admit that stats can be irrelevant, but it’s true and it’s why we cannot always simply go by stats alone.

North were great around the ball, but that’s about where their effectiveness ended, unfortunately. This may come across as harsh, however, the reality is that North couldn’t hit targets inside 50 and their defensive structure seemed confused thus allowing the Bombers’ defenders to win the ball, and slingshot forward.

I will say, in the early parts of the game North were highly effective from clearance; their first two goals came from centre bounce – which they won the count 20-6. However, with such a dominance like that from the middle, they lost the inside 50 count 51-60. In the first half, they were leading this stat and had field position, but couldn’t convert. The longer the game went though, the more the Bombers were able to get things on their terms – so much so that they setup for turnover rather than stoppage dominance.

What this shows is that North have the ability around the ball, but they lack the polish and cohesion going forward. Hopefully, with a new coach set to arrive in the coming weeks/months, some support and polish can be found that allows the Roos the ability to capitalise on what the likes of Jye Simpkin, Luke Davies-Uniacke and company offer to their team, their ball movement, and field position. If you add in some polish, some synergy in the mid-forward zone, and a good defensive structure behind the ball, and the bones are there for North.

Post the mid-season bye, Essendon have been in the top handful of teams for turning defensive 50 possessions into scoring chains. Today was no different. While North built their game around stoppages and having clearance dominance, Essendon would intercept and launch forward from their defensive half. We learned two things from this: first, when Essendon get the space, they are slick and move the ball quickly and efficiently. The likes of Mason Redman (32 disposals at 97%, 607 metres gained) and Nick Hind (24 disposals @ 75%, 553 metres gained) having space to run and the time to use their foot skills will hurt their opponents more often than not – today being no exception.

The second thing we learned was that for all their effort to win the stoppages, North’s ability to defend is about as successful as pouring water into a sieve and expecting to retain it all. They try, but as soon as there is speed on the ball – coupled with efficient disposal out of the back half – North struggle to find a body and put pressure on the ball carrier. The Bombers were able to transition the ball with ease, changing angles, and allowing their forwards good looks at the footy.

North though, when they got the ball, it was either overused by hand, or when they got space, they weren’t kicking to the advantage of their forwards. Late in the game, we got a look at how they can move the ball, albeit when Essendon had checked out because the game was won. It may be a combination of the skill set of the players available, inexperience, being checked out because of the season and the lack of a coach going forward, but a big off-season is required for the Roos to find some structure to defend and find ways to transition successfully, while capitalising on the work of their stoppage beasts.

Jake Stringer was influential today. He may have drifted in and out of the game at times, but he kicked the Bombers’ first three goals, and was in everything. He finished with 5.3 from 14 disposals, had four inside 50’s and laid  seven tackles. The package set the tone early for his side, and had the Roos on the back foot more than once. This was particularly so in the first quarter, Stringer would push up to the stoppage and then drift forward. In the process, the North players would lose their handover leaving Stringer with space to impact either a stoppage or a marking contest, or simply find space. When a guy like Stringer is in the mood he was in today, you cannot afford to give him space.

Both teams were hit with injury and illness in the lead-up. North were covid hit, while the Bombers were missing some key ball winners in Andy McGrath and late withdrawal Dylan Shiel. As mentioned above, North were dominant around stoppages. A staggering 14 North players registered at least one clearance, with Hugh Greenwood and Todd Goldstein leading with 7 (Bomber Zach Merrett led all-comers with 8 for the game).

With the exception of Jy Simpkin who finished with 41 disposals, six clearances, six inside 50’s, and seven score involvements, it was the Essendon midfielders who had a bigger impact on the result of the game. Zach Merrett finished with 1.1 from 38 disposals, with 10 score involvements, eight clearances, and eight inside 50’s, while he also led the match for tackles with ten. Simpkin and Merrett were the prime movers for their teams, but it was Merrett, who had support in the spread around the ground, who had the bigger impact on the game.

Nick Larkey had a rough day – he kicked 0.3 and his teammates didn’t do him many favours. However, he did compete and did lead into good spaces, what was lacking was the cohesion at times. Cam Zurhaar on the other hand, impacted the scoreboard kicking 4.0 and kept his side within striking distance in the first half.

Today wasn’t representative of the talent that these two possess. They can take a contested mark, are good below their knees, and are willing to take the game – and maybe their opponent – by the scruff of the neck. With these two up forward, and the likes of Paul Curtis building into this year, there is plenty to look forward to going forward if North can keep their core group together.

Essendon disappointed us all in naming a debutant as the sub. Jye Menzie started with the vest on, and was able to enter the game late in the third quarter. He was lively, gathering 10 disposals @ 100% efficiency. To all teams – can we stop giving a debutant the vest and let them play?

Jason Horne-Francis built into the game. He finished with 21 disposals and did his best to bash and crash, find some space, and send the ball forward. He had three clearances and four inside 50’s. As with all #1 picks, there is expectation and pressure. He’s had an up and down year, and has all the potential to be the player many expected – perhaps a new coach can unlock his potential?

Ben McKay did a great job on Peter Wright for most of the day. While he may have only had seven disposals, he didn’t allow Wright a clean jump at the footy for much of the day. Ben has all the tools to be an incredibly successful key defender in the league. What he needs is some more support from those around him, and some confidence to attack the contest.

Before exiting the game in the third quarter with an apparent lower leg issue, Jye Caldwell was doing a great run with job on LDU. LDU has had a fantastic season and even with North’s clearance dominance, he didn’t really have a pronounced influence until Caldwell left the ground, a testament to what Caldwell has been able to add to his game in 2022.

Jayden Laverde did a power of work behind the ball today. He intercepted, got involved in scoring chains, and made it really difficult for Larkey and co to impact the scoreboard. The longer the game went, the more control Laverde exerted on the contest.

That’s all for today from under the roof of Marvel. The Bombers were more efficient and had more avenues to goal, showing the extra cohesion and maturity they have, with a settled coaching structure. There are glimmers for North, who must be ready for a break and the coaching issues to be sorted. Essendon travel north next weekend to face the Giants at the Sydney Showgrounds on Saturday afternoon, while North host the Swans at Marvel in the early Sunday afternoon game.

Want more of this kind of stuff? Join The Mongrel to get it!