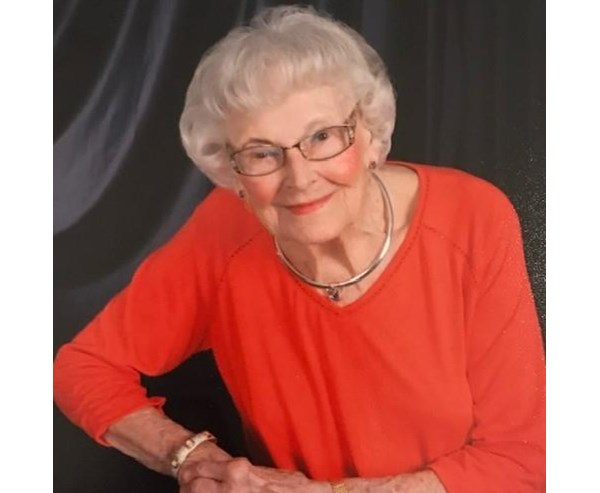 Our family is saddened to announce the passing of our mother and grandmother, Doylene Hansen Slay on June 2nd, 2022. Mom passed away peacefully in the loving embrace of her family. She was 100 years old.

Doy was born March 10, 1922 in Harlan, Iowa to Grover C. Philson and Zella Gearhart Philson. She was the middle child of five in a family that valued education, independence and a strong family bond. After graduating from Harlan High School, Doy taught in a one-room country school for two years. At 20, Doy decided to further her own education at the American Institute of Business. On completing her studies, she was the secretary for an Iowa state representative and later worked in two Des Moines law firms.

On November 11, 1945, Doy married her high school sweetheart, Ivol E. (Ike) Hansen. Ike had recently returned from WWII service as a Naval aviator. He would continue his career in the Navy until retiring in 1967. Together they had two children, Diane, born in Guantanamo Bay, Cuba and three years later, Steven, born in Pensacola, Florida. Over the next many years, Doy was an enthusiastic military wife, eagerly embracing the multiple moves, extensive travel and exposure to new people and places that this lifestyle provided. She became a marvelous hostess, an accomplished seamstress and a confident manager of the family and household during the extended deployments that Ike’s career required.

Following his retirement from the Navy, Ike was employed by TRW; and they moved to Florida. They fell in love with Florida, and it ultimately became their permanent home. In 1977, Ike and Doy bought a home in a new Melbourne community, Suntree. With her children grown, Doy was able to pursue a wide range of interests and community involvement. She started a movement to create a local library branch, and when it was built, performed puppet shows for local children; she became active in the Suntree HOA and was named Person of the Year in 1992; and she was a founding member of the Suntree Methodist Church. Golf for both was an active pursuit, a creator of long-term friendships and a source of pride for the two holes-in-one that Doy made. And they entertained! Their many cocktail and dinner parties, family gatherings and an annual Halloween party were always eagerly attended.

After Ike’s death in 1999, Doy gathered herself and looked forward. She traveled often with her sister, other family members and friends. She took art classes, learned to play the organ, and mastered operating a pc. She gathered other widows for golfing, bridge, dinners and theater outings. In 2006, Doy met James R. (Dick) Slay through a mutual friend. They were married April 8, 2007 and began their new life together in the IRCC community. Again, Doy found an array of activities to enjoy. She and Dick were elegant dance partners; she joined the Cart Barn Players, a community theater group; and she founded the Colony Clown troupe, which continues to thrive. In April of 2020, Dick passed away. Doy continued to live in their home at IRCC until her death.

We will miss her every day. Her zest for life was infectious. Her eagerness to learn, create and engage was inspiring. She was a devoted and supportive wife, a beloved and nurturing mother, a cherished grandmother and a dear friend to many.

Doy is survived by her daughter, Diane (Jack), her son, Steven (Sharon); her grandchildren, Dawn (Shane), Michelle (Douglas), Tracy (John), Nicholas (Anne), and Kimberly (Adrian); eight great grandchildren; her youngest brother, Arland Philson (Marye) and many nieces and nephews. A memorial service and interment with Ike at the Barrancas National Cemetary in Pensacola, Florida will be held at a future date.