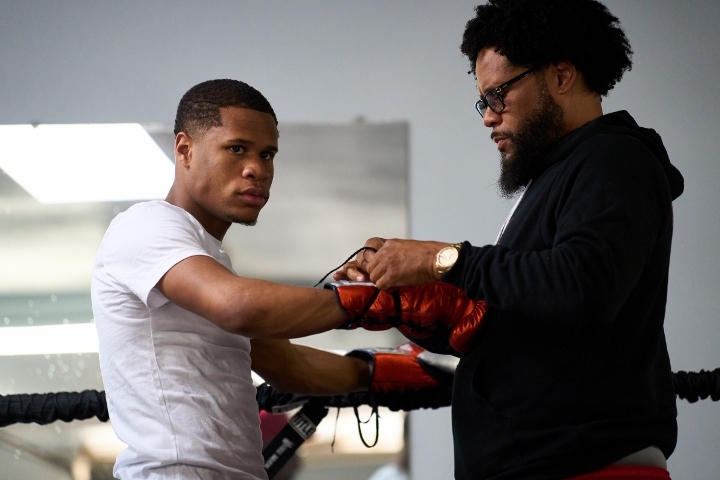 Bill Haney has finally arrived Down Under.

BoxingScene.com has confirmed that the father and head trainer for WBC lightweight titlist Devin Haney was cleared through customs at Melbourne International Airport upon arrival Saturday evening local time. The development comes on the heels of Bill being approved for a travel visa just one day prior after his application was on hold for nearly a month, though arriving in time for the undisputed lightweight championship between Las Vegas’ Haney (27-0, 15KOs) and Sydney’s George Kambosos Jr. (20-0, 10KOs).

The elder Haney’s travel status was in limbo dating back to his being prevented from boarding a plane en route to Melbourne in mid-May. Devin was forced to make the trip without his father, who was up front in his ETA (Electronic Travel Authority) about a 1993 drug conviction for which he served more than a year in prison—a disqualifying factor according to Australia visa rules.

As previously reported by BoxingScene.com, the case remained under review before being approved this past Thursday in large part thanks to a signed Statutory Declaration provided by Devin that ultimately swayed the delegate to approve Bill’s travel visa.

Bill Haney was informed through BoxingScene’s report (as passed along by Trill Boxing Talk podcast founder host Black Fight Fan) of the development early Friday morning, in time to catch a pre-dawn flight to Melbourne. He landed in time to learn of Kambosos initially missing weight before coming back to come in well under the 135-divisional limit on the second attempt Friday evening (Saturday morning locally).

The weigh-in was as contentious as would have been suggested following a fight week that figured to reach a boiling point. The two camps traded harsh words on Friday, with several team members from both sides having to be restrained but ultimately free of physical altercation.

Still, none of what has occurred in the weeks leading up to this fight sat well with the Haney family patriarch.

“Kambosos, you in trouble. Jim (Kambosos, George’s father), George. I don’t like what you’ve been doing with my son. It’s going down. I’m on my way.”

Bill Haney will take the lead in the corner, working alongside longtime mentor Yoel Judah who was prepared to serve as Devin’s head trainer for Saturday’s main event once original travel plans were compromised.

The winner of Saturday’s main event will become the first undisputed lightweight in the four-belt era. It will also mark the division’s first undisputed king at any point since the late, great Pernell Whitaker accomplished the feat in a first-round knockout of Juan Nazario in their August 1990 WBA/WBC/IBF lightweight championship. The former four-division champ made three successful defenses as undisputed king before moving up in weight in 1992.

Jake Donovan is a senior writer for BoxingScene.com. Twitter: @JakeNDaBox