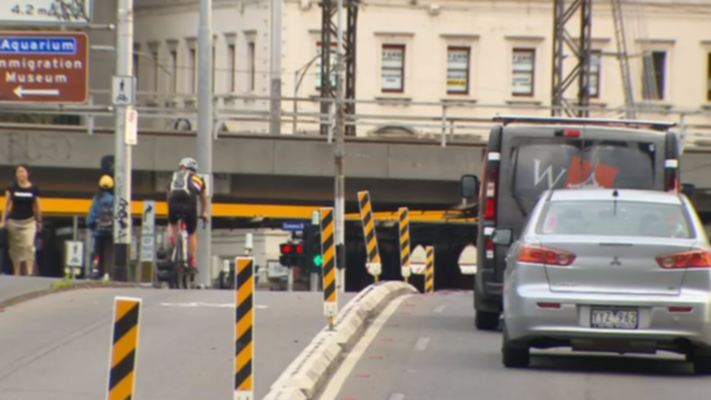 In what turned out to be a monster council meeting, the City of Melbourne has made the controversial decision to pause the delivery of new protected bike lane projects in the CBD.

The decision to temporarily halt the rollout of new bike lines in the city was made during a five-hour council meeting on Tuesday night, where over 1000 submissions against the deferral were put forward by the public.

Watch the video above for more on this story

The council had promised to deliver another 71km of bicycle lanes by 2030, but the creation of new protected bike lanes within the Hoddle Grid will now be deferred as “the city continues to recover and travel behaviour settles into a new rhythm”.

In response to community outrage sparked by “misleading” headlines, according to Lord Mayor Sally Capp, amendments were made to the motion detailing the deferral.

Bike lane projects will now be deferred for only one year with design work, such as the bike lane design for Flinders Street, set to continue during this time.

Dozens of Melburnians spoke during the council meeting, passionately putting forth their reasons as to why the rollout should continue.

Over 1000 submissions against the deferral made by the public were put forward to council. Credit: 7NEWS

Lisa O’Hallaran from the Moreland Bicycle User Group, a volunteer advocacy group that promotes safe cycling to and from the municipality, said there was no better time than now to persist with the rollout of protected bike lanes.

“We’re your neighbours, we shop here, we work here, we visit, we dine, more people roll into the city of Melbourne from Moreland than any other municipalities,” she said.

“Riding a bike is a highly equitable and accessible means of transport, when the infrastructure exists for people to travel safely.

“I am a living example that you do not need to be a contender for the Tour de France to benefit from riding a bike to work and to the shops and everywhere else.”

Capp said finding the right balance between all modes of transport within the city was complex.

“It is disappointing that the discussion on transport in the city has been set up as a bikes vs cars debate, because we want, and our city traders want, to safely welcome both to the city,” she said.

“This motion this evening, and voting in favour of it, represents a balanced approach to safe access to and around our city for all modes of transport and the work that needs to continue to achieve that.”