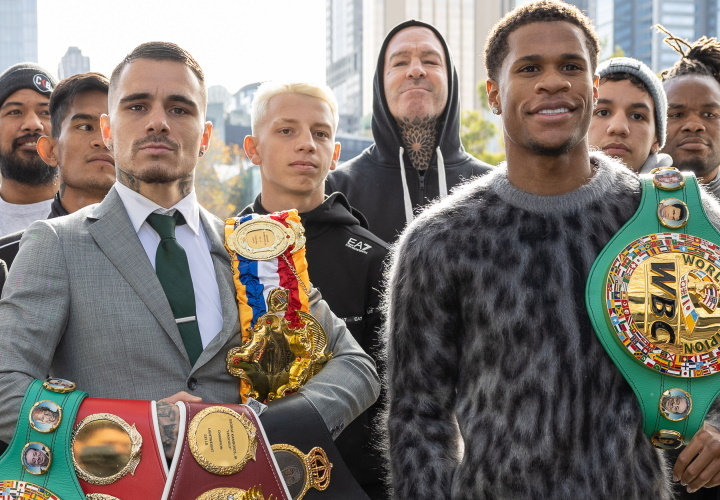 Yet another key member of Devin Haney’s team could be absent from the corner for the biggest fight of his career.

BoxingScene.com has learned that Bob Ware, Haney’s cutman, was detained at Melbourne International Airport upon arrival Friday morning local time due to an alleged discrepancy on his visa application. Authorities claim that Ware failed to disclose a conviction on his original ETA (Electronic Travel Authority) visa application, according to a Notice of Intention to Consider Cancellation, a copy of which was obtained by BoxingScene.com.

According to the cancellation notice, Ware violated Australian Visa condition 8528, which states that “you must not have any criminal convictions for which you have been sentenced for a total combined period of 12 months or more, whether or not the sentence/s were served.”

Authorities allege that Ware answered ‘No’ to the criminal conviction question on his UD-601 ETA form, from which he was granted a visa on May 5. The alleged response conflicted with information provided upon his arrival in the country. declaring on his Incoming Passenger Card (IPC) and in his interview with the Department of Immigration and Border Patrol (DIBP) on Friday that he served 18 months in prison stemming from a January 1995 conviction for Dealing Controlled Substance (cocaine).

Ware disputed the claim that he failed to properly disclose his prior conviction, but his explanation was found insufficient by onsite authorities.

“You have declared that you applied for the UD-601 Visa yourself and that you understood the questions asked,” stated the cancellation notice as issued by the Australian Government Department of Home Affairs. “You have made an admission to incorrectly answering the conviction question on your application but could not provide a plausible explanation for doing so.”

“Based on the above information, there appears to be grounds for canceling your subclass 601 visa. The ground is that you are in non-compliance with condition 8528 of your visa because you have one or more criminal convictions, for which the sentence or sentences (whether served or not) are for a total period of 12 months duration or more. Therefore, grounds exist for cancellation under [Section] 116(1)(b) non-compliance with condition 8528.”

Section 116 of the Parliament of Australia Migration Act—which covers Power to Cancel—indicates that “the Minister may cancel a visa if he or she is satisfied that… its holder has not complied with a condition of the visa.”

The development potentially leaves Haney without a third team member from his previous fights. Bill Haney, Devin’s father, head trainer and manager, was previously not permitted to board a plane leaving the U.S. to Australia, due to his visa status being in limbo at the time and eventually denied, based on a 1993 conviction which he disclosed up front. Ben Davison, a noted trainer from the U.K. who joined Haney’s team in 2021, is currently unable to travel to Australia due to undisclosed visa issues.

[Writer’s note: BoxingScene.com has since learned that Bill Haney’s travel visa was approved late Thursday evening, with efforts being made to get him to Melbourne by Sunday morning local time.]

The potential absence of Ware would leave Haney without one of the sport’s premier cutmen and hand wrappers in the sport. The 51-year-old cornerman is better known throughout the industry as “Do It All” Bob and best known for his work with former five-division champ and pound-for-pound king Floyd Mayweather Jr. during the final years of his Hall of Fame career.

Ware was also one of three cutmen who regularly worked in the Top Rank bubble upon the company’s return to the sport in June 2020 following the first wave of the coronavirus pandemic.

Haney will be trained on fight night by Yoel Judah, whose son Zab was a former two-division titlist and is Devin’s godfather. The elder Judah served as a mentor to Bill Haney, with the two families enjoying a decades-long friendship and working relationship. It remains unclear as this goes to publish who will fill the void left behind by Ware in the event is not able to resolve the discrepancy by fight night.

Jake Donovan is a senior writer for BoxingScene.com. Twitter: @JakeNDaBox