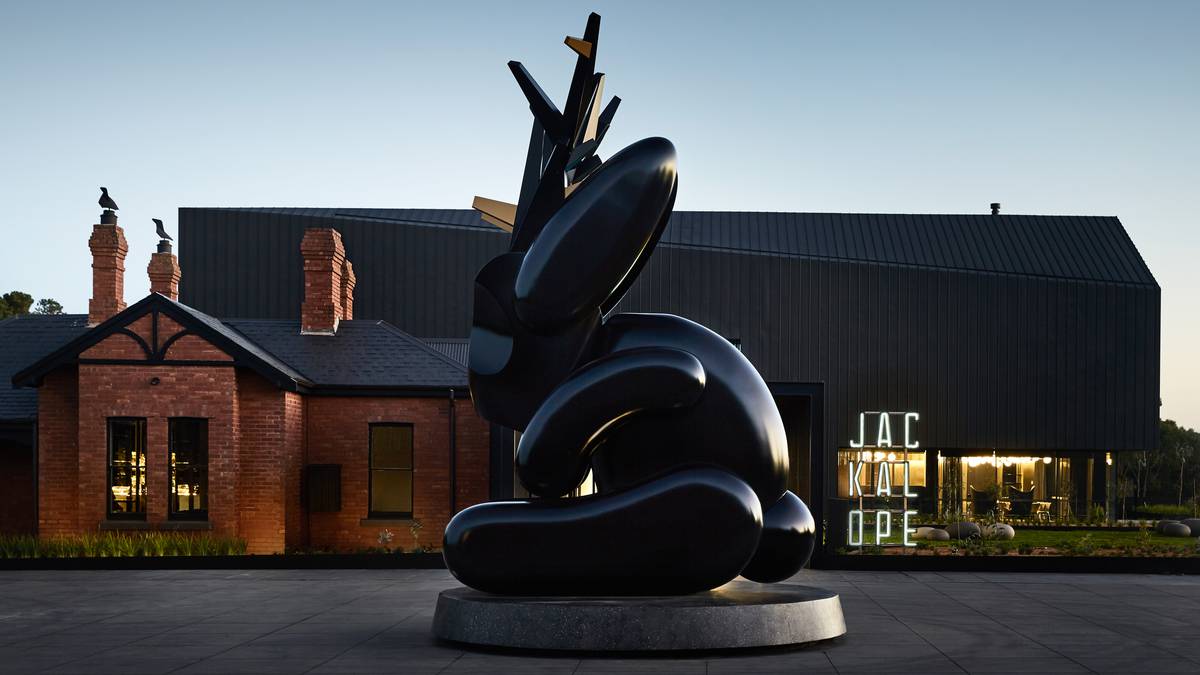 There’s plenty to see and do in Melbourne’s upscale Mornington Peninsula, and no trip is complete without a stay at the Jackalope Hotel, writes Kendall Hill.

When Jackalope opened in 2017 I was among the first guests – it was, in fact, still a building site – and spent my stay wondering whether old-money Melbourne’s holiday coast was ready for something this avant-garde.

I needn’t have worried. This hulking black hotel, united (by clever architects) with an original 1876 homestead and the well-regarded Willow Creek Vineyard, is exactly what the Mornington Peninsula needed.

An injection of style, a bizarre carnival of accommodation themed after the mythical North American jackalope – a hybrid hare-antelope creature captured in a seven-metre sculpture by Melbourne artist Emily Floyd – with arresting art throughout, exceptional drinking and dining, and a cloakroom lined entirely in rabbit furs.

Five years on, Jackalope remains one of Australia’s more out-there hotel experiences. During a recent dinner at fine-diner Doot Doot Doot (the name’s jackalope-related, naturally – a doot doot doot is apparently the leader of the pack), I’m welcomed warmly and presented with a menu and a coin.

The Doot Doot Doot fine-diner at the Jackalope features more than 11,000 light bulbs hanging from the ceiling. Photo / Visit Victoria

Diners mark their choices between two entrees, three mains and two desserts by scratching away the corresponding gold bits – using the aforementioned coin – to reveal a Morse-code message beneath.

Still with me? Yes, Jackalope’s new dining format is unusual, but the codebreaking exercise does help pass the time while waiting for your first drink. I’d recommend a flute of Willow Creek’s 2017 vineyard brut. It’s Australian for Champagne.

The deciphered text reads “Get away from all we know.” It’s a fair summation of what’s to come food-wise and also describes the broader experience at Jackalope (motto: “Escape from reality.”)

Guests in the restaurant sit at gold-flecked terrazzo tables beneath a pulsating installation of 11,000 light bulbs inspired, staff will gladly explain, by the wine fermentation process.

The set menu starts with cunning snacks including “Fish and chips”, a crisp golden rod of potato rosti laden with fish eggs and yuzu curd, and “Bacon and eggs”, an eggshell filled with aerated chestnut cream and crowned with a crisp rasher of “lamb bacon”.

Both are exciting omens of what’s to come on the $125 set menu. All the dishes are highly elaborated but never so much as to overshadow the calibre of ingredients or the profound pleasures of eating rare and tender kangaroo with a heady red-wine jus, and strawberry and rosemary cream panna cotta showered with elderflowers. In other words, there is great substance behind Jackalope’s eccentric style.

The 42 rooms, ranging in size from a spacious 38sq m to 85sq m suites, are monochrome and minimalist with glass walls and terrace balconies on to bucolic surrounds. You want a vineyard-facing room because the others look across a car park and that’s not the view you want for $650 a night (minimum).

Willow Creek’s vines stitch both sides of a valley and end at a eucalypt forest on the facing hill. Directly in front of you, the 30-metre black horizon pool with sundeck and bar lends a (slightly gothic) resort-style feel to proceedings, as does the sunset cocktail terrace.

Breakfasts are quite conventional and delicious. Lunch at vineyard bistro Rare Hare is one of regional Victoria’s dining highlights (have the chive waffle with horseradish creme fraiche and salmon roe). And, despite its chemistry-lab chic and funky furnishings, house bar Flaggerdoot actually serves killer cocktails, Willow Creek wines and a stunning selection of gins and whiskies.

Its showmanship aside, the pleasure of Jackalope is its charming setting on a picturesque peninsula. It’s especially lovely on cooler, pine-scented mornings when mists render vines and bushland in soft focus and the keening calls of black cockatoos fill the air. Jackalope is romantic at heart.

Guests could, and often do, spend their entire stay on the premises. Drifting between meals at restaurant, bistro or poolside, tasting wines, appreciating art, succumbing to spa treatments and making the most of their designer digs. Popcorn and icecreams are delivered free till 11pm to encourage in-room movie nights.

But it would be a shame to miss the Mornington Peninsula’s many attractions, especially as Jackalope’s so handy to many of them.

Out and about on the peninsula

For swimming, there’s a choice between tranquil bay beaches such as Dromana and Mount Martha and the wilder back beaches at Point Leo and Portsea. There are also terrific surf breaks along the 200km shoreline.

Colourful ‘beach boxes’ are common in this part of Melbourne. Photo / Visit Victoria

The Peninsula Hot Springs is a popular spot for relaxing. Photo / Visit Victoria

More than 50 of the region’s wineries have cellar doors. The best way to visit them, obviously, is to hire a driver. Like Danielle Field, the former concierge at Jackalope. Her company MP Experience runs day trips to wineries and farmgate producers with insider commentary and a lunch stop at Max’s Restaurant (run by her brother) for fresh seafood and panoramic views to Western Port Bay and Phillip Island. Field can also hook you up with winter truffle hunts in Red Hill.

There are more than 50 vineyard cellar doors to visit in the Mornington Peninsula. Photo / Visit Victoria

If staying a few days, put the following on the must-do dining list: Many Little is a smart-casual Sri Lankan restaurant and bar serving fiery curries and fabulous cocktails. On the foodie strip of Mornington-Flinders Rd, you’ll find Tedesca Osteria, the closest thing Australia has to an authentic agriturismo experience. Chef Brigitte Hafner and her team deliver warm, generous hospitality, menus of freshest farm produce and phenomenal wines from the peninsula and beyond. You will not want to leave (trust me on this).

Ten Minutes By Tractor is slightly more formal, a peninsula interpretation of a sharp French country restaurant where Fat Duck-trained chefs send out sophisticated plates and gun sommelier Xavier Vigier works his wine-matching magic. Both are unforgettable and worth a trip to the peninsula, an hour’s drive south of the CBD, on their own.

As is Jackalope. Melbourne’s favourite beach playground has finally got its groove on.

See more of the Jackalope Hotel on TVNZ1’s Lap of Luxury, on Tuesday, May 31.