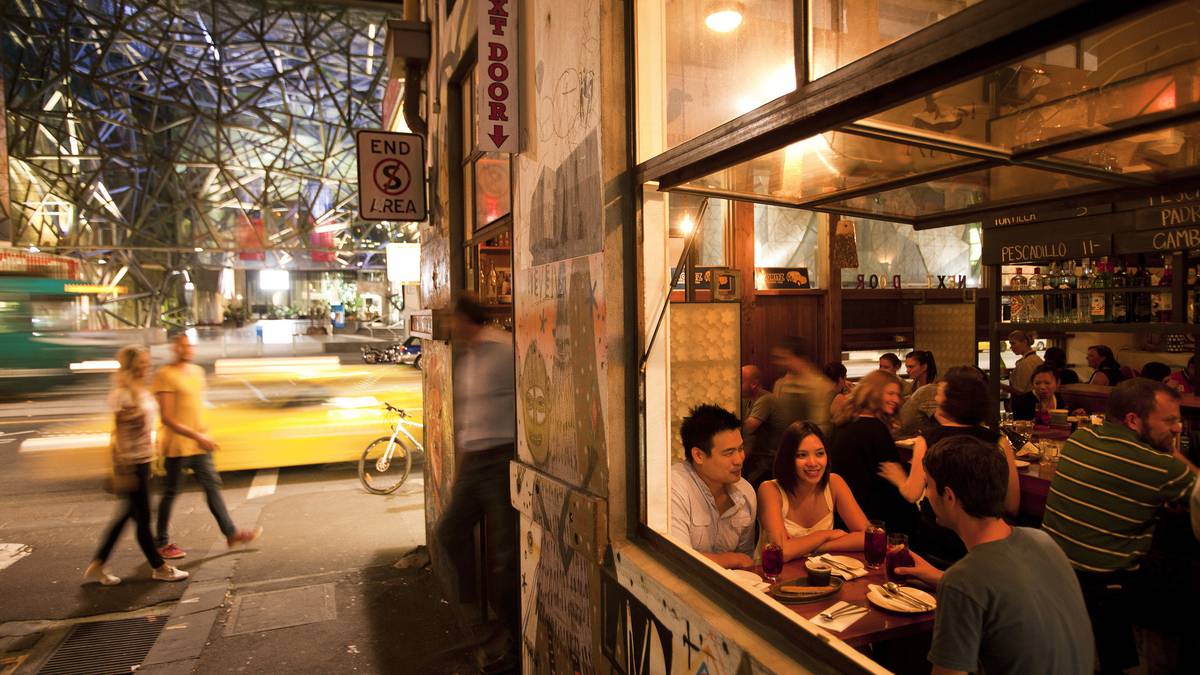 The people -watching and manchego croquetas all add to the European feel of Melbourne’s MoVida Next Door. Photo / Visit Victoria

Compile a list of Melbourne descriptors and “European” will always rank highly. Si, this city of 5.1 million is, in truth, a gloriously multicultural beast, built on the traditional land of the Wurundjeri and Boon Wurrung people. Nevertheless, there’s something palpably continental about the place, its architectural grandeur, fickle weather and bohemian bent more Berlin than Bondi. For Kiwi travellers not yet ready for the words “long haul”, Australia’s second-largest city may just be the next best thing.

While rival Sydney leans on sunshine and surf for much of its appeal, Melbourne’s bluestone laneways, neo-Gothic spires and monochromatic wardrobes wear winter especially well. This is a city well-versed in rugging up and bunkering down, in world-class galleries, theatres, restaurants and bars, in gracious Victorian arcades, in curious buildings buzzing with artists, designers and artisans. Winter in Melbourne means multi-disciplinary arts festival Rising (June 1-12, rising.melbourne) and the Melbourne International Film Festival (miff.com.au) in August.

At the National Gallery of Victoria, shorter days and icy southerlies spell Winter Masterpieces, the gallery’s blockbuster mid-year show. In 2022 it’s The Picasso Century, a world-premiere exhibition developed exclusively by the Centre Pompidou and Musée National Picasso-Paris. Examining Picasso’s career in dialogue with the artists, bohemians and intellectuals in his sphere, the exhibition’s inventory is impressive: more than 70 artworks by the Malaga-born master and more than 100 works by his contemporaries, including Henri Matisse, Gertrude Stein, Georges Braque, Marie Laurencin and Salvador Dali. According to NGV senior curator Miranda Wallace, “It’s the first time these two major French institutions have brought their collections together in this way, to examine Picasso in this context.”

National Gallery Victoria is one of the cultural highlights of a visit to Melbourne. Photo / Visit Victoria

Artists rarely exhibited in Australia – among them Suzanne Valadon, Julio Gonzalez and Natalia Goncharova – are also featured. Wallace is also enthused by the inclusion of Picasso’s so-called magic paintings. “Created in the 1920s and early 1930s, the works are quite linear, with beautiful colours. They’re quite extraordinary”.

Picasso pieces from the NGV’s own trove include mid-century ceramics produced in the south of France and his 1937 portrait Weeping Woman. The latter became Melbourne’s most infamous painting after thieves calling themselves the Australian Cultural Terrorists nicked the work from the gallery one night in 1986. It was a shockingly easy heist, the A$1.6 million purchase simply unscrewed from the wall and carried out unnoticed. A ransom note to then Victorian Arts Minister Race Mathews demanded a 10 per cent boost in arts funding and the creation of a A$25,000 annual art prize to be known as The Picasso Ransom. Otherwise, the Weeping Woman would get it. Mathews refused to budge. Despite the ominous threats and missed deadline, an anonymous tip-off eventually led authorities to the unharmed lady’s location: locker 227 at Spencer St railway station. The culprits were never caught. “Weeping Woman is famous for all the wrong reasons in Melbourne”, Wallace muses. “It will be great to see it in the exhibition and understand it more in context. That’s a very exciting aspect of the show”.

Stepping out of the NGV’s St Kilda Rd campus – a brutalist bluestone fortress designed by acclaimed architect Sir Roy Grounds – it’s not complete folly to imagine yourself in one of Camille Pissarro’s wintry depictions of Paris. Orderly rows of elms line the broad, tram-graced boulevard, speckled copper with straggling autumn leaves. Catch a southbound 58 tram to France-Soir (france-soir.com.au) and the Parisian vibes are even deeper. A veritable institution, the bistro’s French-accented waiters have been serving proper rillettes, boeuf bourguignon and vin to an eclectic cast of power brokers, socialites and the odd rock legend (among them Mick Jagger) for decades. All that’s missing is Picasso and his sketchbook.

Melbourne has long fancied itself as un peu europeen. By the 1880s, enormous gold-rush wealth had transformed a fledgling colonial village into one of the world’s largest metropolises, awash with architectural magnificence channelling “Old World” vanity. In the Carlton Gardens, architect Joseph Reed looked to Brunelleschi when designing his dome for the World Heritage-listed Royal Exhibition Building. On Collins St, Venetian opulence inspired the gold-leaf sumptuousness of the ANZ Gothic Bank. Nearby, mosaicked Block Arcade found its muse in Milan’s Galleria Vittorio Emanuele II.

The eastern end of Collins St has long been dubbed the “Paris End” (albeit cynically by some locals). Despite the encroachment of modern glass towers, the tree-lined strip remains undisputedly chic, flanked by refined Victorian edifices, chandeliered private clubs and haute couture. In the 1950s, the much-loved French-Australian artist Mirka Mora and her art dealer-restaurateur husband Georges famously entertained artists, writers and intellectuals at their studio residence at number 9. Both Holocaust survivors, the couple were part of the mass post-war migration that would radically alter Melbourne, turning a city that looked somewhat European into one that felt, tasted and sounded it.

These novice Melburnians and their descendants have shaped many city highlights: sipping spritzes to Italian pop on Lygon St, deli-hopping in the Queen Victoria Market’s art-deco Dairy Hall (qvm.com.au), devouring anchoa on Hosier Lane. The latter – a long, crisp crouton topped with Cantabrian anchovy and smoked tomato sorbet – is the cult-status tapa at MoVida (movida.com.au), chef Frank Camorra’s acclaimed modern Spanish restaurant. Picasso would have approved. Despite living in France for many years, his true love remained the food of his homeland. He may, however, have opted for the better people-watching at its more casual sibling MoVida Next Door, washing down manchego croquetas with a Catalan xarel-lo or three. Across the street at Ian Potter Centre: NGV Australia (ngv.vic.gov.au), a formidable collection of Australian art includes many of Mirka and Georges’ famous friends, among them Charles Blackman, Arthur Boyd, Joy Hester and John Perceval.

That MoVida is hidden down a street-art-drenched alleyway is hardly surprising. In this town creativity and delight lurk in unexpected corners: upstairs, downstairs, in the labyrinth of city laneways and arcades that wouldn’t feel out of place in London, Naples or Prague: Degraves St and Centre Place, Block Place, Royal Arcade, Hardware Lane, Guildford Lane. On Flinders Lane, stairs lead down to experimental gallery-cum-performance space Fortyfivedownstairs (fortyfivedownstairs.com) and up to edgy fashion label Alpha 60 (alpha60.com.au), its Chapter House store set in a Hogwarts-like neo-Gothic hall. A block away, artist, muse and gypsy Vali Myers once worked from the 1920s Nicholas Building (nicholasbuilding.org.au), its time-warped, subway-tiled corridors still leading to galleries, ateliers and one-off shops selling Japanese photography tomes, bespoke fascinators, vintage French and Spanish heels. Secret Melbourne nooks made for boho souls and rainy-day adventures.

MoVida is hidden down a street-art-drenched alleyway in Melbourne. Photo / Visit Victoria

Check the latest border restrictions in each state and territory before travelling. For more information visit australia.com