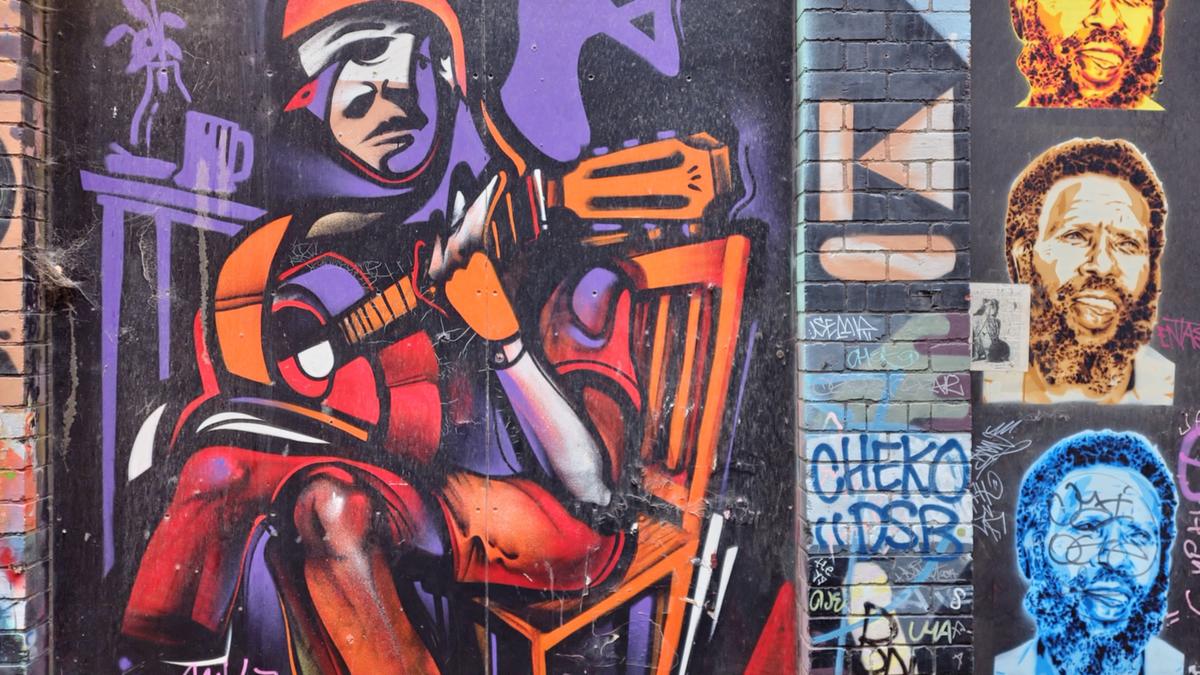 Between the photorealism of Matt Adnate and the most artless graffiti scrawl there are kilometres of spray can paint crisscrossing Melbourne’s famous street art scene.

For this, my first visit to Melbourne in several years, I’m looking to fill the gaps in my somewhat meagre knowledge of Melbourne laneway art by avoiding the popular Hosier Lane, ACDC Lane and the like. Instead, I’m seeking out fresh frescos, so to speak — armed with the City of Melbourne’s excellent street art walk trail (download link below).

Before setting off, I check out The Picasso Century exhibition (on until October 9) at The National Gallery of Victoria. Even though artistically speaking it’s more of a main course, it makes a perfect entrée for my walk, Picasso’s Cubist paintings especially priming eyes and mind for what’s to come.

After all, is there really such a distance between Picasso’s so-called primitivism, serpentine lines and fractured perspectives and Jaz Mishap’s arresting mural and light installation Ancestral Worship, which I’m standing before in Drewery Alley?

It’s a pity I can’t come back tonight to see the neon lights in action. But you can see a time-lapse video here.

As Jaz writes on the same website, the work is “a neo-shrine that speaks to honouring our ancestors, and the idea of a global mythical being who borrows from many cultures, beliefs and religions.”

She adds that it’s “by ghost stories I watched with my dad as a kid, our Chinese heritage and ancestors, trips to Tokyo and hot onsen in the cold mountains of Japan, deities and colours of my time in India, and my partner’s love for the original Blade Runner film.”

The artwork just around the corner in Drewery Lane couldn’t be more different. Yet it, too, is a homage, an honouring of ancestors: in this case, war veterans past and present. This symphony in small tiles, co-ordinated by artist Sankar Nadeson, whose mosaics form larger centrepieces, is at the rear of Legacy House.

Further on, in Guildford Lane, I discover a more elegant, rarefied environment that still signals its industrial origins. Lined with live plants, the lane is home to cafes — one of which is a cat cafe! — and tromp l’oeil murals like Mike Makatron’s (he of Jungle Funk mural fame) which act like windows into Melbourne’s history.

Blender Lane – what a contrast. Flagging its underground credentials straight up, this is one of the original, experimental street art crucibles which in recent times has not been without its challenges from developers.

It’s an appropriate place to end my walk, with the fresh fruit and veg delights of the Queen Victoria Market beckoning. I recall stumbling on Ling’s sculpture Crushed Can in Wills Street: a giant crushed spray can whose surface itself invites graffiti. Its twisting shape, multiple planes and riot of colour takes me straight back to, you guessed it: Picasso.

Will Yeoman was a guest of National Gallery of Victoria. They have not seen or approved this story.