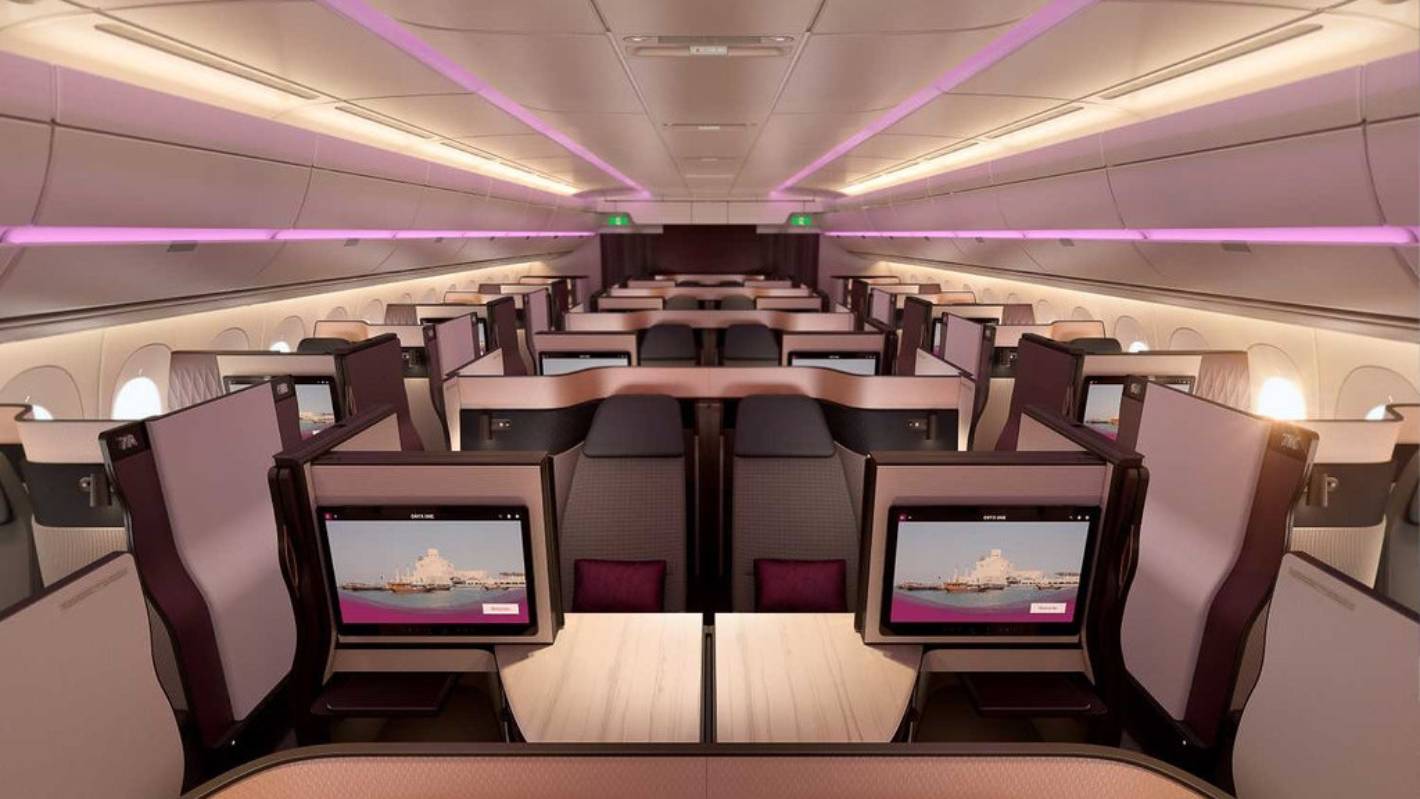 The business class cabin on board Qatar Airways.

Privilege Club. Qatar Airways is part of the oneworld alliance, which means you can early Qantas Frequent Flyer points and status credits with the airline.

The Qatar Airways QSuite features a sliding door, something other airlines are now emulating.

The Qatar Airways QSuite was the first to introduce doors to business class.

3.9 tonnes of carbon are produced by this flight (compounded by flying business class). Qatar Airways is committed to zero emissions by 2050 and offers an offset program.

At the time of flying, masks are compulsory on board when not eating and drinking. A “protective kit” is provided with a mask, hand sanitiser and gloves. At the time of writing, Qatar itself requires Australian visitors to be full vaccinated, have proof of a negative PCR Covid-19 test and complete the Ehteraz pre-registration form online or via the app of the same name (the latter is also the vaccine passport for entry to venues in Qatar).

It’s a full flight or close to it – a rarity these days – and upon arrival at Melbourne airport the economy check in queue snakes back beyond the bollards. Business class has no queue though and once the ground crew member has checked my aforementioned paperwork I’m on my way.

Qatar Airways’ Qsuite is sold as closer to first class than business and it’s easy to see why. The seat has a sliding door, making it feel like a private cabin. And it certainly feels spacious. It has 79 inches (200 cm) of legroom and is 21.5 inches (55 cm) wide. The layout is 1-2-1 but the design means every second row in the middle seats, including mine, faces towards the rear of the plane. If you’re travelling with someone else, the partition between the two middle seats can be removed. Two pillows, a soft blanket and pyjamas are provided.

The crew converts the seat to flatbed mode, adding a thin mattress and laying out the blanket. I sleep well eventually after a few turbulence bumps keep me awake for the first hour. The base of the seat creates a bit of a lump in the bed around my calves I find a bit annoying.

An extensive selection of recent release movies, popular hits and genuine classics from the Golden Age of Hollywood. There’s a wide range of TV shows but mostly 3-4 episodes rather than entire seasons. The QSuite screen is huge at 21.5 inches (55 cm). There’s power in the seat and on board wi-fi, which is free for one hour for Privilege Club members, or $US10 (NZ$16) for the whole flight (only $US8 if booked in advance). Noise cancelling headphones are provided.

As it’s an overnight flight, after the meal service the cabin crew leave us to rest. The flight attendants are friendly and efficient, though there are some minor slip ups like initially bringing me the wrong main meal, which are quickly rectified.

It’s a late night flight but I can’t resist staying up to sample the dinner menu. For starters I have a sweet potato and coconut ginger soup, followed by western Australian crayfish in a creamy cheese sauce as the main. Other options include beef tenderloin, chicken curry and potato gnocchi. There are also several lighter options including a beef burger or chicken stir fry. For breakfast I opt for a cheese omelette with chicken sausage and potato rosti.

There’s a wine list of French, Italian and Spanish options, including the obligatory French champagne. I don’t drink alcohol on flights so I’m pleased to see there’s also a range of mocktails on the menu.

Sitting in the final row of business class has a couple of drawbacks – we’re the last to order and be served, as a result some menu options are no longer available.

The airline has embraced the upcoming World Cup with a soccer, sorry, football-themed safety video featuring UK actors Jason Thrope and Ross Hatt, along with football stars Neymar and Robert Lewandowski, along with Brazilian legend Cafu. Despite running for more than six minutes, it’s amusing enough to give those Air New Zealand videos a run for their money.

Qatar Airways has been named World’s Best Airline at the Skytrax for six years in a row and this is the first time I’ve had the opportunity to see what all the fuss is about. The food and service are good, but the QSuite is easily one of the best business class seats in the sky. It’s worth noting that several other airlines are now playing catch-up and introducing their own private suites, with sliding doors, into business class – previously a feature only found in first class.

OUR RATING OUT OF FIVE

The writer travelled as a guest of Qatar Airways.