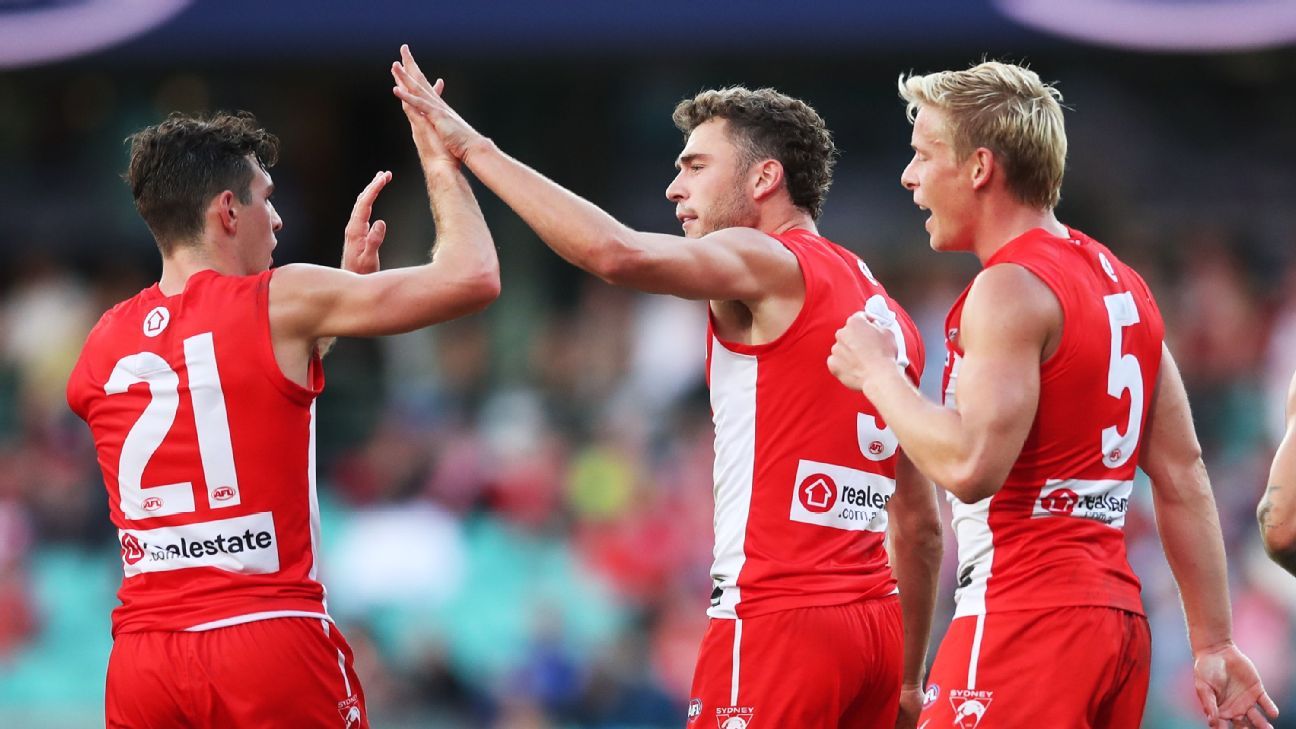 An Isaac Heeney-inspired Sydney have overcome a spirited North Melbourne to snatch an 11-point AFL victory after injury forced Lance Franklin out midway through the match.

Heeney goaled with four seconds remaining to seal the win, having been instrumental throughout the final term as the Swans were given a huge fright by a Kangaroos team that responded heroically to a 108-point thumping by Brisbane last week.

The Kangaroos appeared set for an unlikely victory when Kayne Turner slotted the opening goal of the final term to stretch their lead to 14 points but the Swans were then able to kick the last four goals of the match to prevail 13.8 (86) to 12.3 (75) .

Will Hayward celebrates a goal for the Swans. Photo by Matt King/AFL Photos/Getty Images

Justin McInerney kicked a crucial goal in the 22nd minute to make the margin six points but the Kangaroos then had several forays forward that included a behind to Jaidyn Stephenson until Heeney’s final intervention ended the contest.

“There still has to be times when players stand up and (Oliver) Florent probably did during a fair bit of the game but particularly the second half was good, McInerney’s last quarter, Heeney’s last quarter,” Sydney coach John Longmire said.

“(Heeney) lifted in that last quarter, as good players do. He played a very important last quarter for us, as a number of those boys did.

“We need that next group coming through to be able to do that and take a bit of the load, and they did and that was really important.”

Franklin was mobbed by thousands of fans after kicking his 1000th career goal the last time the Swans visited the SCG but this time was forced to watch on for the last quarter and a half when substituted out of the match due to a finger injury.

While the Swans will be happy to leave with the four points there will also be some concerns for Paddy McCartin after he went straight down to the changerooms following a heavy knock halfway through the final term.

Love the AFL? Australian users can personalise their ESPN experience by downloading the App. Get live scores, news and videos ANYWHERE, ANYTIME.

The former No.1 draft pick returned to run out the match.

North Melbourne shook things up with Jack Ziebell starting forward and he earned an early free kick with a desperate tackle on Nick Blakey that set the tone for the Kangaroos and gave them the opening goal of the match.

Ziebell brought some of the pressure and intensity he has played with in defence over the past year back to the Kangaroos’ forward line but impressed just as much as a leading target to finish with five goals.

“I probably didn’t expect the skipper to kick five but I was really pleased,” North Melbourne coach David Noble said.

“I thought his contribution was huge, not just as a forward, I think as a captain he led the way really well today.

“Probably hard to move him out of there next week. We needed a response and he led the way.”

At the other end, Swans veteran Sam Reid also announced his return with an early goal, taking his chance from a set shot 50m from goal and close to the boundary in the first term.

The injury-prone forward-ruck was involved in several attacking plays on his recall to the senior team for the first time this season, and helped stretch a North Melbourne backline that also had to deal with fellow talls Franklin and Hayden McLean (both two goals).

The Kangaroos had more options in the ruck with Todd Goldstein and Tristan Xerri double-teaming the Swans’ club debutant Peter Ladhams, but the deep Sydney midfield was able to dominate the clearances 42-30.

North Melbourne will next look to put in another strong showing in a Good Friday clash with Western Bulldogs at Marvel Stadium while Sydney travel to Perth to play West Coast later that same day.