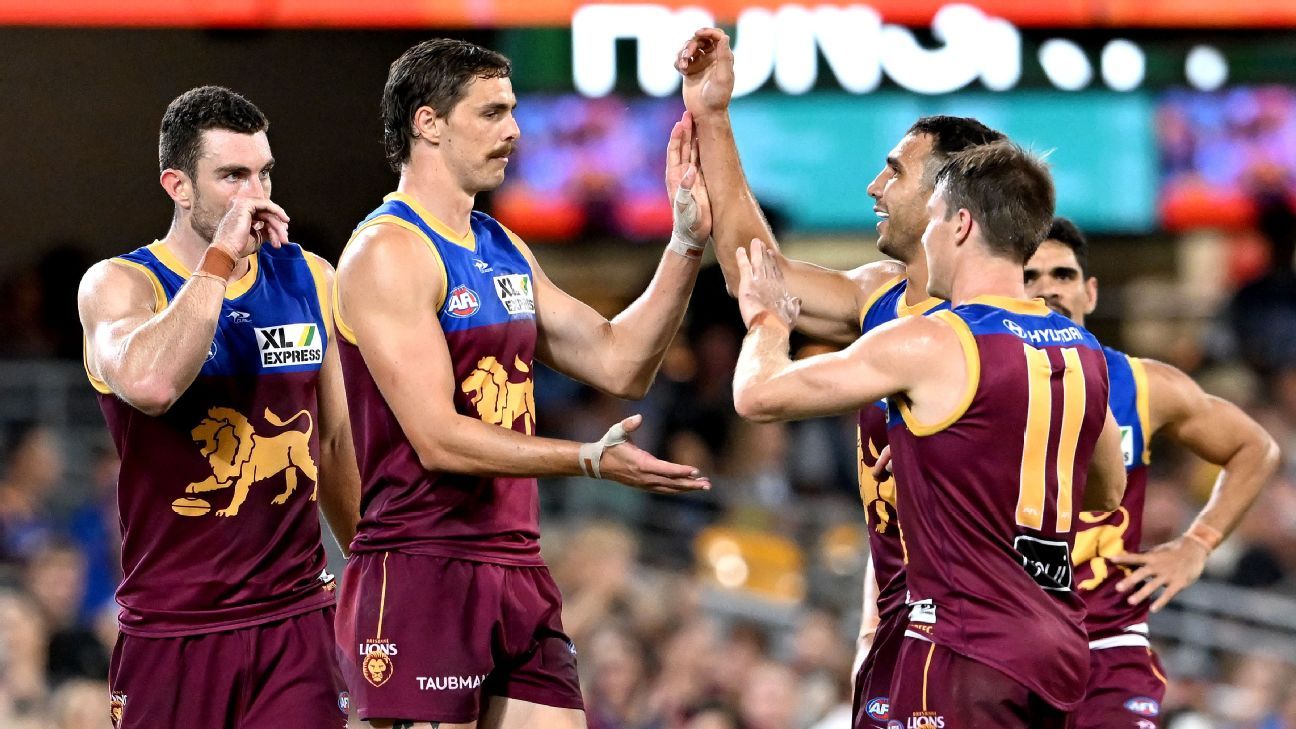 Brisbane have mauled North Melbourne by 108-points at the Gabba to continue their perfect start to the AFL season.

Led by a career-best five-goal display from small forward Lincoln McCarthy, the Lions were relentless against the Kangaroos as they claimed a 23.18 (156) to 7.6 (48) victory.

Others to get amongst the goals in the rout included Zac Bailey and Joe Daniher (three each) while Charlie Cameron, Daniel McStay and Jarryd Lyons had two apiece for the hosts as 11 players booted majors.

Brisbane put on a show against the Kangas. Photo by Bradley Kanaris/Getty Images

It is not only the highest score kicked by the Lions under Chris Fagan but the winning margin eclipses a 91-point win over Gold Coast in round 21, 2019 as the biggest win of his tenure.

Nick Larkey, on the back of his six-goal haul in last weekend’s win over West Coast, kicked two to be the only multiple goalkicker for the visitors.

Captain Dayne Zorko showed little sign of his troublesome calf issue as he picked up 28 disposals and 10 marks in an impressive display.

Hugh McCluggage (29 disposals, four tackles and four clearances) was also busy while key defenders Harris Andrews and Marcus Adams were dominant at the back.

Despite the heavy defeat, Kangaroo Jy Simpkin led the disposals count for the match with 31 touches to be the visitors’ best.

Having been somewhat below their best in two hard-fought wins in the opening two rounds of 2022, the Lions came out of the blocks roaring.

Joe Daniher’s shot on the run from outside 50 in the opening minutes began a seven-goal barrage in the opening term to have the hosts up by 30 at the first break.

Their tails up, Brisbane charged into a 55-point lead during the second term before three late goals before the break by North got them back.

Love the AFL? Australian users can personalise their ESPN experience by downloading the App. Get live scores, news and videos ANYWHERE, ANYTIME.

As good as the Lions were in the opening term, a moment of ill-discipline by Jarrod Berry, who was reported for striking Nick Larkey with a swinging arm behind play, will have left coach Chris Fagan fuming.

Brisbane resumed their charge in the third quarter but despite several impressive marks by Cameron, the Lions’ forward failed to kick a goal, scoring four behinds in the quarter.

A nine-goal final term by the Lions piled on the pain for North who have a 1-2 record heading to the SCG next weekend to face Sydney.

The Kangaroos also lost Ben McKay in the fourth quarter with a corked thigh after a heavy collision with Josh Walker meant he had to be subbed for Aiden Bonar.

Brisbane travel to Geelong to face the Cats in their next fixture.