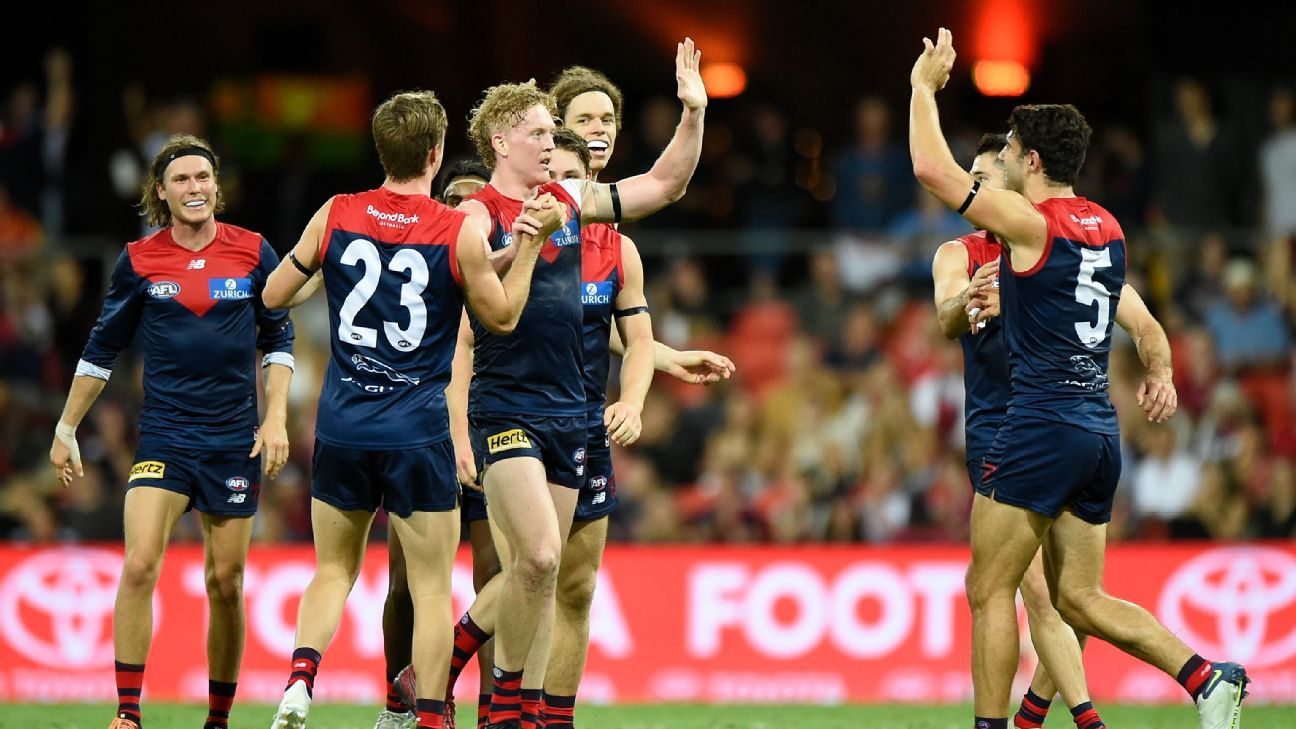 Melbourne’s premiership class has overshadowed a battling effort from Gold Coast as the Demons posted a 13-point AFL win over the Suns.

On the back of their drought-breaking win over West Coast in Perth last weekend, the Suns made a fast start at Metricon Stadium but couldn’t keep pace with the Demons as the premiers made it two-from-two with a 12.10 (82) to 10.9 (69) win.

Young star Luke Jackson was everywhere for the Demons in an eye-catching performance, picking up 21 disposals all over the ground, seven clearances and kicking two goals including a crucial effort in the opening term.

Gun midfielder Christian Petracca claimed a career-best 41 disposals, picking up 14 inside 50s for his team in a typically dominant display.

Teenager Jake Bowey continued his fine start to his AFL career, with 34 disposals and nine marks.

Clayton Oliver of the Demons celebrates a goal against the Suns in Round 2. Matt Roberts/AFL Photos/Getty Images

Kysaiah Pickett and Ben Brown also kicked two goals apiece for the visitors, while Clayton Oliver (34 disposals and a goal) was also impressive for the Demons.

Gold Coast’s own superstar midfielder Touk Miller was the standout for the hosts.

Recruit Levi Casboult had two goals on his home debut for the Suns while fellow newcomer Mabior Chol was busy throughout, attempting several eye-catching plays and kicking a goal after strong pack-mark before tiring late in the game.

Noah Anderson and Jack Lukosius were the other multiple goalkickers for the Suns with two each.

Despite the late omission of small forward Izak Rankine due to a corked quad, the Suns started faster than their more-fancied opposition, kicking the first 15 points of the game before the Demons hit the front with 30 seconds to go in the term after three late goals.

Melbourne extended their lead to 16 points in the second term but rather than wilting, the Suns came again and got within two points before another late rally by the Demons had them 14 points clear at the main break.

The Suns were unable to keep up with Melbourne’s accurate finishing in the third term and when Pickett scored his second on the run with a fine finish they had opened up a game-high 22-point advantage at the final turn.

Anderson’s second goal of the night in the fourth quarter had Gold Coast in the hunt, but the Demons kept their opponents at arm’s length for the final minutes to claim a 10th straight win over the Suns.

Melbourne host Essendon at the MCG on Friday while Gold Coast travel to Sydney to play GWS next Saturday.