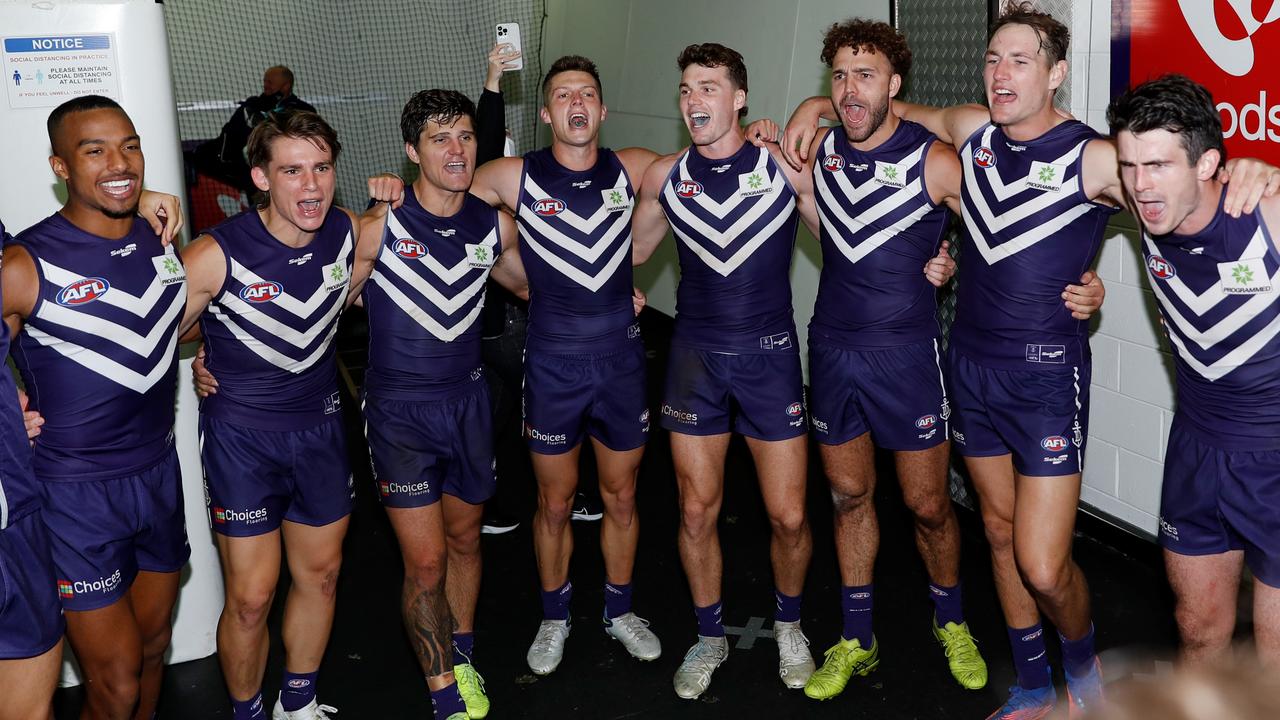 Celebrations for a big win over Geelong last week could have contributed to a new Covid outbreak at Fremantle.

The Covid outbreak at the Fremantle Dockers has claimed six players ahead of Friday’s clash with North Melbourne and coach Justin Longmuir believes victory celebrations last week could be to blame.

Defender Griffin Logue, ruckman Lloyd Meek and forward Michael Frederick are the latest players to be ruled out, joining Rory Lobb, Blake Acres and Travis Colyer who were also forced into the health and safety protocols earlier this week.

Longmuir was cautiously optimistic there will be no further players ruled out for the clash with the last-placed Kangaroos at Optus Stadium, with coaches and players extra cautious this week.

Players have been training in small groups and even housemates were told not to car pool to training.

But Longmuir said the damage could have been done after the upset three-point win over Geelong in Geelong last Saturday and away games, with travel, were always an issue.

“After a good win you tend to get a bit more touchy-feely and closer and sing the song together,” Longmuir said.

“Then we sat on a bus for an hour, sat on a plane for four hours and then sat on another bus back to the club for 40 minutes.

“It could have happened in that time.

“Definitely, (away games) are a riskier time. That’s something we’re going to have to look at down the track.

“This is probably just a by-product of it being close proximity for such a long period of time that it becomes inevitable, but we think we’ve kept it to a manageable number.

“It doesn’t affect any chances of us performing this weekend.”

Longmuir was adamant the club had enough depth to cover the six absentees, with hopes ruckman Sean Darcy and Hayden Young could be a among those to return to the team.

The Dockers will also unleash last year’s No.8 draft pick Jye Amiss, who will make his AFL debut after kicking eight goals in his past two WAFL games,

Amiss is a 196cm, 18-year-old East Perth product the club took with the draft selection gained from Carlton in the Adam Cerra trade.

“His last three games at Peel have been really solid,” Longmuir said.

“I’ve been really impressed by the way he has approached learning the game plan, learning the roles in the forward line.

“He possesses some elite forward craft and he’s been hitting the scoreboard, which is a by-product of the work that he’s doing. He’s in good form and deserves his opportunity.”

Fremantle are rolling at a 6-1 record while the Kangaroos (1-6) face a fight to avoid a second consecutive wooden spoon.